Tatar: The final stage has been reached over Maraş! Tatar stated that the Maraş initiative was also included in contacts he made in Ankara, The city of Maraş (Varosa) remained closed for 46 years, it was not possible to return Maraş and that the Foundations owns land there. Tatar noted that Maraş (Varosha) will gradually open to settlement in the near future in line with the decision of the government.

Tatar said that the opening of the coastline to tourism as an international brand will bring many gains to the country and that the inventory studies of the region have been carried out and that it has reached the final stage by considering it with its legal dimension.

After asking about the inclusion of the closed Maraş (Varosha) in the zoning plan, Tatar noted that the zoning plan work started during the four-party government period, but as a result of their evaluations, there were some difficulties and suggestions.

Tatar also said that the Urban Planning Department will make an assessment, and that there was no policy regarding Maraş during the four-party government period and that as soon as the UBP-HP government was established, Maraş was on the agenda. 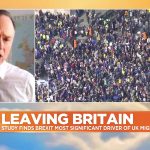 ‘COVID-19 could be wiped out in London by June’