Black Is King by Beyoncé on Disney+ – Official Trailer

Are you excited for Beyoncé’s Black Is King? Be the critic on Fan Reviews! 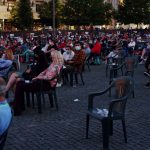