The Outsider is an HBO miniseries based on the novel of the same name by Stephen King. It was ordered to series on December 3, 2018, after being optioned as a miniseries by Media Rights Capital in summer 2018.

These air filters are designed for… your nostrils? — Future Blink 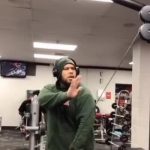 Guy Does Popular Dance Moves While Working Out at the Gym

The Invisible Man with Elisabeth Moss – Behind the Scenes