UBP is a party that establishes this country, keeps it alive and is determined to keep it alive. We are his adversaries. ” he said.

Here are the answers of Üstel to the questions;

We have stated that this project is a very important project especially for Lapta and our country in general. Unfortunately, we could not explain this and our people in Lapta reacted to us because we did not protect the project.

After this project was not approved, the company informed the Lapta Municipality in writing that it had withdrawn from the tender.

When the initiatives started in May after the pandemic period, the legal process continued even though the first company withdrew.

When we started to open the sectors, Lapta Municipality sent an invitation to the second relevant company in writing.

The first company has withdrawn from the tender, the legal process is continuing, but come before this date is over and the tender will pass to you. ” Company officials came to this country with a total of 9 people, following all the rules of health and quarantine, sending their identities in advance, giving them permissions, and distributing them to all ministries, with the permission of the Minister of Transport.

Of course, there were those who tried to divert it.

The Mayor of Lapta wrote a new invitation letter to the company, which he said had no news, on 29/6/2020 and said, “Come on, the tender is up to you, let’s make the contract.” Didn’t Lapta Mayor know this company?

This would be a major reflection of the investment, but unfortunately, we lost such an investment and investor.

This business person, who came to the country with his family and his assistants, would see the place, but these people were treated unusually. ”

Question: What do you think after these events?

These people came to the country with the permission of the Council of Ministers.

Everyone held us responsible.

Our Prime Minister also dismissed me using his Constitutional right.

My complaint is not my dismissal, but duly.

I was the closest man of our leader.

With the pressure from our partners, our Prime Minister dismissed me.

Why did our partners in government insist i was dismissed, of course, by cutting the right arm of our PM before the presidential election, they did it to weaken US. Why did not our Prime Minister insist on getting our own minister? our party was damaged. There is the Presidential election ahead and we will see the reflection of this. The glass is broken now, will it be the same? of course not … ”

Question: The UBP VQA gathered the other day and stated that they reassured Mr. Ersin Tatar. So, do all UBP members support Mr. Tatar?

” Trust refresher happens with the congress. VQA is a board of 13 people, it is not yet the time for this.

UBP is a big family. There is a Party Assembly, an assembly group, its organizations …

There is a date of October 11 ahead of us, and this is the only thing we need to focus on in this process. It is an important day for our country. ”

Question: Is there a problem in the party? What do you think?

” Mr. Tatar is a mature and experienced politician.

These events upset me very much because our partners in Government insisted and our chairman dismissed me.

This was done without disclosing the police report.

They had to wait for this report.

A newspaper hit the headline the other day and asked, “Who is this minister?”

The camera footage was deleted and the question was asked who was this minister.

I am waiting for the police report and the result, and I also wonder who this minister is.

I hope it comes up early. Let this minister appear.

If there is a procedural error and omission, all relevant ministers should be dismissed.

Then we have no objection, but as your country, you make an initiative and present it to the Council of Ministers and then punish Ünal Üstel for a procedural error.

I was standing next to the Prime Minister with my knowledge and I was giving heartfelt support.

I will be always in UBP until the end, but one gets astray from these events.

If any, the offender should be dismissed.

Only this punishment was imposed on Ünal Üstel.

We were asked to sit aside.

We don’t sit aside.

Our people gave me approval for 23 years.

My name did not mix with any individual.

If they find the smallest one, I can also resign from my parliamentary mandate.

Ünal Üstel was immediately dismissed, while two ministers of the partners in Government were responsible.

we were dismissed because Özersay demanded. He wants to break up UBP. UBP established this country, is a party that is alive and determined to keep it alive. We are his adversaries.

I should have been dismissed according to the procedure, not at the demad of Özersay. ” 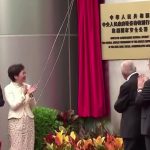 Sounding for a new 4 way coalition! will the old CTP-HP-TDP-DP Coalition happen?