President Mustafa Akıncı spoke with Josep Borrell, the EU High Representative on Foreign Affairs and Security Policies and Vice-President of the EU Commission, who called him tonight. The meeting lasted half an hour.

President Akıncı told EU High Representative on Foreign Affairs and Security Policies and Deputy Head of EU Commission Josep Borrell that he did not come to Cyprus and meet with him and caused serious discomfort in the Turkish Cypriot community.

President Akıncı stated that there were two main parties in Cyprus in the phone call, and in the past, hemeet with the president of the EU Commission Jean-Claude Juncker, President of the European Parliament Martin Schulz, EU Council President Donald Tusk and High Representative Borrell’s predecessor, Federica Mogherini. He reminded Borrell that he had many meetings abroad.

Borrel said that they would compensate for this shortcoming at the earliest opportunity, by expressing their sadness that they could not meet with President Akıncı by coming to northern Cyprus during his Cyprus visit.

Stating that the proposal will create a platform for dialogue under UN auspices and EU observation,

President Akıncı said that he expects the EU to support the proposal to eliminate the tension in the Eastern Mediterranean.

President Akıncı once again emphasized to Borrell that he is ready to work with the EU at all levels to solve the Cyprus problem.

Borrell also expressed his view that they favor dialogue and cooperation in the Eastern Mediterranean and that both communities in Cyprus have the right to this wealth, and conveyed his desire to work on dialogue in the upcoming period with President Akıncı. 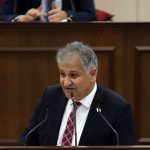