The city of Leicester may be facing a localised lockdown after a rise in coronavirus cases, Home Secretary Priti Patel has confirmed.

Speaking on the BBC’s Andrew Marr Show, she said it was “correct” that the government was considering the move, reported in the Sunday Times.

Mayor Sir Peter Soulsby said there was “no immediate prospect” of a lockdown.

Speaking on BBC Breakfast before Ms Patel was interviewed, he said data from testing was still being analysed.

Asked about restrictions, he said: “I don’t think that is an immediate prospect.

“After many weeks of asking, we now have that data and we are analysing it over this weekend, and hopefully early next week we will know whether we have a problem and if we have, where it is.”

Sir Peter said he had been in constant contact with chief medical officer, and said it would have been “far better” if the level of testing in the city had been greater.

He said: “Leicester is a large urban area, a total of nearly 600,000 people, with many neighbourhoods and communities within it…

“It’s only really if we know whether there is an issue, and where it might be, we can decide what if anything we need to do.”

Ms Patel said she had spoken to Health Secretary Matt Hancock about a possible local lockdown, and said “extra support” would be going into the area.

“With local flare-ups, it is right we have a local solution”, she said.

Local health experts confirmed they were involved in planning next steps in tackling the virus, with attention focussed on the North Evington area.

Leicester East MP Claudia Webbe has called for a lockdown due to a “perfect storm” of poverty, positive tests and higher ethnic diversity.

She said: “I don’t know why they’re not enforcing a lockdown – the evidence suggests there should be one.”

Local GP Mayur Lakhani voiced his concerns over the effectiveness of localised measures.

He said: “I think there is too much of a connection between Leicester and the county to have very localised lockdowns.

“This will all be driven by the data – which postcode has the most number of cases.”

Just over a week ago, Health Secretary Matt Hancock revealed what he called an “outbreak” of Covid-19 In Leicester. In the first fortnight of June, 658 people had tested positive. With 2,500 cases in the city since March it’s certainly a worrying statistical spike.

North Evington was identified as an area of the city with a surge in cases – it’s a community of tightly-packed terraces, mixed in with old industrial buildings and places of worship for many faiths. It’s a good representation of Leicester as a multicultural city.

A mobile centre has been set up this week in Spinney Hill Park so people can now walk to get a test. But the council says it needs the data from positive tests quickly if it is to react.

It says it didn’t get the data from the first fortnight of June until Thursday, so only this weekend has been able to plot where the Covid-19 cases are.

The data also doesn’t give an ethnicity breakdown, which mayor Sir Peter Soulsby says would be vital in helping understand which parts of the community are being affected by the virus – he’s asked the health secretary for this data.

Leicester has seen a number of Covid-19 cases in recent days.

Business has been hit too, with three people testing positive at Sainsbury’s supermarket in Melton Road, food manufacturer Samworth Brothers confirming a “handful” of cases at its Beaumont Leys sites and an unconfirmed number at the Pladis factory in South Wigston.

A spike in coronavirus cases has led to fears Leicester could face a local lockdown.

This morning, the Home Secretary Priti Patel said that with “local flare ups it’s right to have a localised solution”.

However, it is not sure exactly what that would look like.

Currently, councils do not feel like they have the powers to effectively shut off a city in the way you might expect.

Rather, places where an outbreak has occurred – such as meat-processing plants – could temporarily shut and workers asked to be tested and self-isolate.

Increased testing in an area would also likely play a part. The government says a mobile testing centre was set up in Leicester as cases appeared to increase.

This morning, the Mayor of Leicester Pete Soulsby said they were looking at neighbourhood-level data to assess what “extra support” might be needed in those areas. 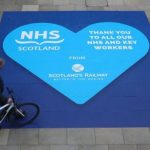 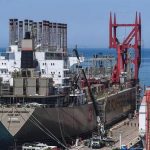