Stating that they are currently working for health and economy in the country, Tatar noted that there was no change in the election, that the election would be held on October 11th, and that they agree with them as political parties.

The meeting under the Presidency has been completed.

Making a statement to the press after the meeting, Prime Minister Ersin Tatar stated that they confirmed that the presidential election will be held on 11 October.

Stating that they received information about the negotiations and demands with the UN and that the problems in Pile were discussed at the meeting, Tatar explained that the transition from Pile be facilitated as of June 1.

TRANSITIONS TO THE SOUTH …

Expressing that one of the most important agenda items of the meeting was the transitions to the South, Tatar noted that nearly 500 people work in the South and that they welcome them to go.

Stating that he has assigned to the Minister of Health Ali Pilli for negotiations and criteria on this issue and how the transitions will be, what the conditions will be, Tatar said that the President made contact afterward and voiced this to the other party and that the date of June 8.

Stating that it is said that it may be a priority for employees, trainees, and patients, Tatar said, “We are evaluating it, we do not think it will be a problem, health is important.

Tatar celebrated the Ramadan Feast of the Turkish Cypriot people and the press at the end of his speech. 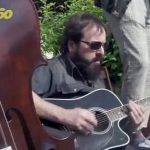 British Band Isolates Together So They Can Keep Rocking During Coronavirus