A plane belonging to Tailwind Airlines, which landed at Ercan Airport today, will take off again to take Iranian students home. it was noted that Iranian students studying in the TRNC will go to their countries.

It was stated in the information of the Ministry of Public Works and Transport that the operation related to the flight was realized not by the state, but was organized entirely among the Iranian students themselves. 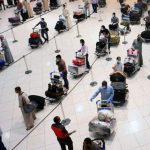 “Attacks on Bayraktar Mosque and increasing mosque attacks are worrying”