Crossing points will eventually reopen but not yet, says Akıncı President Mustafa Akıncı said that the reopening of the crossing points will eventually happen, but , unlike the manner they were shut, it will not be possible to open them through unilateral action.

“We need cooperation and consensus in order to reopen the crossings,” Akıncı told Kanal T on Tuesday night.

Arguing that it was a mistake that the decisions for the closing of the crossings by the two sides were unilateral ones at the time, he said they should not be reopened unilaterally in the same manner.

He said that the prerequisite for the reopening of the crossings should be with cooperation and understanding.

“This is a decision to be jointly taken,” Akıncı said, adding however that the time was not right for the crossings to reopen.

“When we reach that point, coordination will be necessary internally, with the UN and the Greek Cypriot side,” he said.

In response to a question as to whether or not the Greek Cypriot side would approve of a settlement that included Turkey, Akıncı expressed his view that it will be in the best interest of the two communities as well as Turkey to maintain good and friendly neighborly relations.

“But our agenda today is not the Cyprus Problem. We will do what is best for our community when the time comes,” he said.

Akıncı also argued that it was not possible and unnecessary for Turkey to cut its ties with the island.

“The whole world knows this reality. Whether it was in 2004 or in Crans Montana in 2017, we were close to agreeing on a framework. Unfortunately, we couldn’t finalize it,” he said.

Akıncı reminded that the framework had been set straight with the UN Secretary-General Antonio Guterres’s statement following the trilateral meeting in Berlin.

A possible date for an unofficial five-party meeting followed by an official one will only be determined once the current the global coronavirus pandemic is over, he added.

Akıncı said whether or not new negotiations process can begin will be determined by the Turkish Cypriot community.

“The elections will determine whether or not there will be a new round of talks. The UN Secretary-General will be preparing for a five-party meeting. However, the only thing on the world’s agenda right now is the global pandemic.

Also commenting on the upcoming elections, Akıncı pointed out that there was no provision in the constitution regarding the postponement of presidential elections but that parliament had made the decision after seeking the views of the attorney general.

“The public is unhappy that this issue is being debated in such a fashion. Some may want me to leave at all costs. But the ultimate and final decision will be made at the ballot. We need to be patient. Parliament has set October 11 as the election date but we could hold elections earlier if it will not pose a risk to public health,” he said.

Regarding the economy, Akıncı also repeated his earlier view that the economy could not come before the public’s health.

“As I have said before you cannot have an economy without having health,” he said, pointing out that it was necessary to have a pandemic hospital, more tests and stricter adherence to measures before a decision was taken to reopen economic sectors.

Akıncı said that he did not agree with the government’s refusal to touch higher-income segments of society while expecting the civil-servants and private sector employees to bear the cost of the crisis.

“Everyone needs to shoulder responsibility and chip in,” he said, adding that this could be possible through removing inequalities in income and creating a fair tax system,” he said

Responding to claims by the government that he was trying to undermine the authority of the cabinet by setting up scientific and economic advisory councils, Akıncı said such claims were ridiculous.

“These advisory boards were not set up as decision-making bodies to rival the government or to be an alternative to the government. Their sole purpose is to assist and offer recommendations,” he said.

Akıncı pointed out that all the other presidential candidates, including National Unity Party (UBP) leader and Prime Minister Ersin Tatar, had vowed to be more active in domestic politics if elected.

“It is difficult to understand his reactions to the assistance we are trying to provide, particularly at a time when we are fighting a pandemic,” he said. 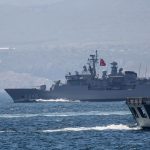