North Cyprus Prime Minister Ersin Tatar stated that the attitude of the Greek Cypriot administration to cooperate with the coupist General Haftar Administration, who is against the current administration in Libya, regarding usurping the rights of Turkey and the TRNC is not acceptable.

Tatar said that they closely follow the geopolitical developments in the Eastern Mediterranean and are committed to protect their national strategic interests with Turkey.

In his written statement Tatar said the following:

“We have followed with concern the contacts of the Libyan House of Representatives Chairman Akile Salih, who is the pro-Libyan coupist of General Khalifa Haftar, with the Greek Cypriot Administration and his political pursuits against Turkey.
This visit once again showed that our approach to the Cyprus problem and our foreign policy should be re-evaluated with a broader understanding.

The rapidly developing security and energy cooperation between the Turkish Republic of Northern Cyprus and Turkey is also a critical part of this great strategic picture.

Within this context, it should not be forgotten that our stance on the Cyprus problem has moved to a new dimension with the changing Eastern Mediterranean geopolitics. We carefully monitor and evaluate dynamic regional developments.” Çavuşoğlu: ‘Greek Cypriots need to settle their issues with the TRNC in advance’ 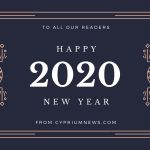