In his speech at the conference, Taçoy made a call to the Greek Cypriots and all other related countries to accept the equality of the Turkish Cypriots in respect of the natural gas on the island and stressed “All of the other options are composed of a dream, as long as they violate our rights, they will hit a wall”.

Adding that the maritime agreement signed with Libya shows that nothing can be achieved in the Eastern Mediterranean without Turkey, Taçoy expressed that the Turkish Cypriot State has a common past and culture with the member countries and as an honourable observer member depends on the principles of OIC. Furthermore, Taçoy stressed that he is so pleased to express that the TRNC has developed its relationship with the OIC countries in the areas of trade, education and tourism and also in various other fields. 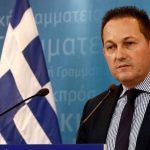