In the wake of Turkey’s deal on maritime boundaries with the UN-backed Tripoli-based government in Libya, tensions in the eastern Mediterranean are rising daily.

Last Tuesday, the U.S. State Department called the deal, in which Turkey claims waters around Cyprus and a number of Greek islands, “provocative”.

On Wednesday, Greek Prime Minister Kyriakos Mitsotakis met Turkish President Recep Tayyip Erdoğan on the sidelines of a NATO summit in London and expressed his country’s disapproval, while the European Union pointed out that details of the agreement had yet to be made public.

On Thursday, South Cyprus petitioned the International Court of Justice at The Hague to protect its sovereign offshore right, while columnist Merve Şebnem Oruç acknowledged in Turkish pro-government Daily Sabah that the deal was problematic.

Then on Friday, Greece gave the Libyan ambassador three days to leave the country, and Turkish Foreign Minister Mevlüt Çavuşoğlu responded by accusing the Greek government of threatening Libya.

Finally, EU foreign ministers met on Monday to address the pact, which the Austrian foreign minister called “astounding”. No sanctions were on the cards at Monday’s meeting, but this was only the first step in Greece’s diplomatic offensive, which will continue on Thursday when Aguila Saleh Issa, the leader of Libya’s parliament, is scheduled to visit Athens.

Is the eastern Mediterranean set to explode?

“It’s been simmering for a long time and Turkey has been playing brinkmanship,” said Dimitar Bechev, research fellow at the Atlantic Council, referring to Turkey sending drilling vessels to the area this year and issuing problematic navigational warnings. “So far so good, it hasn’t gone over the brink. But that might not be sustainable.”

Alexander Clarkson, lecturer for German and European studies at King’s College London, saw the situation more gravely. “When it comes to the eastern Mediterranean, any escalation there could lead to a fundamental breakdown in relations between Turkey and its European partners,” he said.

The Turkey-Libya deal faces a couple of major hurdles. First, any peace deal to end Libya’s civil war might void the deal with Turkey, as the Tripoli-based Government of National Accord (GNA), with which Ankara made its deal, would likely end up with less than full governmental control.

In addition, Clarkson said the Turkey-Libya deal is sure to upset Italy, whose partially state-owned oil and gas firm Eni has interests in Libya, where Italy also backs the GNA, and has agreed with South Cyprus on drilling rights in the waters that Turkey aims to control.

“The Italians have much more leverage in the Libyan context than the Turks do,” he said, suggesting that Rome might use its influence with the GNA to reshape the deal.

Barring these outcomes, Turkey is expected to maintain its robust stance. Ankara has dispatched drilling exploration ships escorted by Turkish military vessels to Cyprus waters four times in the past year, sparking protests from South Cyprus, Greece, the European Union and the United States. Turkey is now planning to deploy a fifth exploration convoy.

Cengiz Aktar, international relations professor at Athens University, wrote last week that Turkey’s increased aggression is part of a new maritime doctrine called Blue Homeland that lays out Turkish dominion over 460,000 square kilometres in the Black, Aegean, and Mediterranean seas. In support of this doctrine, Turkey has allocated greater funding to its navy and, earlier this year, carried out its largest ever naval exercises.

All this shows how Ankara has failed to understand that its increasing belligerence and bellicose rhetoric, according to Clarkson, has mainly served to benefit its foes. South Cyprus is an EU member, which means the EU will always take its side.

“If the EU thinks, and if Ankara shores up the impression, that Ankara is no longer interested in dialogue, then the EU will always prioritise the interests of a member state” and take decisive action, said Clarkson. “The Greek Cypriots know that; they can just wait and let the situation deteriorate.”

Clarkson also pointed out that critics of Erdoğan within European governing bodies, along with Turkish dissidents and Kurdish activists in Europe, all have a stronger voice today than just a few years ago.

This will make it harder for Ankara to defend any acts of aggression or attempt to annex North Cyprus, which would cross a red line. “Cyprus is the point of no return,” he said.

Bechev is confident that a reunified Cyprus would likely join NATO, which means Russia is likely to be in favour of the status quo and against any significant movement toward a resolution on the island. Thus, Moscow is presumably supportive of Turkey’s aggressive posture, which is likely to make it even less palatable to Europe.

“We might be facing a crisis down the road,” Bechev said. “But I hope that ultimately Erdoğan will be stepping back.”

The latest messages from Turkey about the Libya deal suggest this is still some way off. Pro-government outlets said the deal would end what they called the violation of sovereign rights by Greece and Cyprus and strengthen Turkey’s legal case, while Turkish Foreign Minister Mevlüt Çavuşoğlu said more deals would follow and pro-government Yeni Şafak said in an editorial that Turkey’s game in the eastern Mediterranean had just started.

Clarkson saw all this as troubling signs.

“If you look at the rhetoric coming out of AKP (ruling Justice and Development Party) media outlets or the AKP about the eastern Mediterranean and Cyprus, I don’t think they really understand that that’s the red line,” he said.

The views expressed in this column are the author’s and do not necessarily reflect those of CypriumNews. 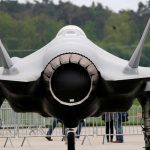 U.S. sets aside $440 million to purchase F-35s ordered by Turkey

Turkish former PM Davutoğlu to launch party by next week