Turkey has involved Libya in its long-running attempt to establish a 200-mile wide Exclusive Economic Zone (EEZ) in the mineral and hydrocarbon-rich waters of the eastern Mediterranean.

On Nov. 27, Faiez Serraj, the leader of the UN-recognised Libyan government was at Istanbul’s Dolmabaçe Palace to sign a memorandum of understanding with Turkish President Recep Tayyip Erdoğan.

Details of the deal appear to have been leaked by a Turkish diplomat. The agreement has it that Libyan and Turkish EEZ waters abut each other in the middle of the Eastern Mediterranean.

There have been angry protests from Egypt, Cyprus and Greece that the Turkish-led move is illegal and ignores their own stronger maritime claims.

EU members Cyprus and Greece, in particular, insist they have international law on their side in the shape on the United Nations Convention on the Law of the Sea (UNCLOS). Turkey refused to sign the 1982 treaty while Libya has never ratified its signature.

The EU has threatened sanctions against Ankara, which has prompted Erdoğan to say in response that on the basis of his country’s intervention since 1974 of Northern Cyprus, he might lay claim to all waters around the island.

Washington has called Turkey’s move unhelpful and provocative. Perhaps more significantly, Israel, which has long-standing low-profile links with the Turkish military, has also declared its support for Greece.

Oil-rich Libya has no obvious medium-term interest in exploiting an EEZ, to which it has never before laid any formal claim.

In 1973, Libyan dictator Muammar Gaddafi drew a straight line across the Gulf of Sidra (Sirte) insisting all waters within it were Libyan territory. He declared the new boundary the “Line of Death”. In the event, it was only four Libyan pilots who died in two encounters with American warplanes when the U.S. navy conducted freedom of navigation operations up to Libya’s normal 12 miles (22 km) limit.

Serraj’s participation in Erdogan’s deal is very likely to have been prompted by the military and logistical support Ankara has been providing to his Government of National Accord (GNA).

Turkey along with Qatar and Italy, which has a military field hospital at the airport of Libya’s third main city Misrata, is backing the GNA in the current civil war.

Haftar was appointed a field marshal by the rump of the elected parliament, the House of Representatives (HoR), which was relocated to Tobruk after the 2014 Muslim Brotherhood-led militia coup in Tripoli.

Since April this year, Haftar has been mounting a lacklustre assault on Tripoli, in which at least a thousand people, including civilians, have died.

It took the LNA three years to drive fundamentalist militants out of Benghazi, a victory that was only achieved with the widespread destruction of parts of the city.

Command and control over the largely ill-trained forces on both sides is generally parlous.

In Benghazi, advances were only made after heavy bombardment, an option that would be politically unacceptable to the international community in the assault on the capital.

Russian irregular forces of the Wagner Group, reportedly operating alongside LNA units, have so far made no appreciable difference.

Turkey has provided the GNA forces with armoured vehicles and thousands of “technicals”, the open-topped trucks mounting machine guns or cannons, which are the favoured mobile weapon on both sides. Ankara has also supplied and may have operated surveillance and attack drones.

Erdoğan may be trying to force the pace of talks that begun with Athens in 2013 for the joint exploitation of hydrocarbon reserves between Rhodes, Crete and Cyprus. However, discussion of what Erdoğan has described as a “win-win” opportunity got nowhere when he met Greek premier Kyriakos Mitsotakis on the sidelines of the NATO summit held in London this week.

Though Greek anger is considerable, its initial wrath has so far only fallen on Libya. The country’s ambassador in Athens Mohamed Younis AB Menfi was given 72 hours to pack his bags and go home. GNA foreign minister Mohamed Siyala said the expulsion was “unacceptable”. He added that if Greece still had an envoy in Tripoli, he would have been expelled immediately.  In 2014 Athens withdrew its diplomats to neighbouring Tunis after security collapsed in the Libyan capital.

This week the GNA interior minister Fathi Bashagha was in Doha where he met Qatar’s deputy premier and foreign minister, Mohammed bin Abdulrahman bin Jassim Al-Thani,  who is seen as the coordinator for the Emirate’s support for both Libya and Turkey.

Beyond the normal diplomatic platitudes, no details of their discussions were released. However, they may well have included the political risk Serraj is running by adhering to Erdoğan’s deal.

At the moment the GNA enjoys the formal support of the UN and much of the international community. The maritime agreement with Turkey will be widely opposed on legal grounds at least.

By putting his name to the deal, Serraj may have placed himself out on a limb. He has certainly scored a diplomatic own goal since the rival eastern administration of Abdullah Thinni has been loud in its denunciation of the deal.  The extent of the risk Serraj is taking may be a reflection of the importance he attaches to continued Turkish support against Haftar and the LNA. 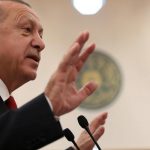