Deputy Prime Minister and Minister of Foreign Affairs Kudret Özersay stated that as the Turkish Cypriot side their intention and expectations from the same statement are very different than those of the Greek Cypriot side.

Attending the Boğaziçi Summit organized under the auspices of the Turkish Presidency in İstanbul, Özersay replied the questions of CNN Türk.

Özersay made the following statements regarding the triple meeting held in Berlin on the issue of the Cyprus problem:

“In fact, there is a process that has been continuing since 1968. 51 years have passed. We have experienced many summits, triple meetings, five-party conferences regarding Cyprus.

Unfortunately, when you express your intention, it does not mean that you refer to the same thing. We state the same sentence that we want a bi-communal, bi-zonal federation in Cyprus but our intention and expectations regarding this sentence are very different than those of the Greek Cypriot side.

The United Nations has determined that the Greek Cypriot side is not ready to share administration and wealth with the Turkish Cypriot side and this determination is still valid today.
While there is mutual distrust, to behave as if there is a common vision between the sides and just repeat the same concepts such as ‘political equality, bi-zonality, bi-communality and federation’ will not be enough to solve the Cyprus problem.

There is not a date, calendar or a referendum regarding a result-oriented negotiation process. 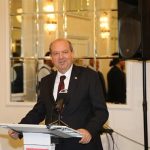