The TRNC government is not considering returning Varosha/Maraş to its former Greek Cypriot occupants, Prime Minister Ersin Tatar has said.

“Varosha was the EVKAF’s property. This and that happened. From now on we are not considering returning Varosha.

Whatever is necessary will be done taking into consideration all of this, The Immovable Property Commission will be in action, The process could last between one and two years.

However, the stance of the government is crystal clear, there is no step backwards, The support we have taken from Turkey is also in this direction, Work will be carried out that will cause the return of former inhabitants. Therefore, there is no situation for the ECHR and the UN to oppose”.

He expressed the view that the target of the Greek Cypriots was a unitary state and to cut off the Turkish Cypriots from Turkey so as to return the situation to the pre-1974 period.

Tatar expressed his support for a two-state solution in Cyprus, claiming that the public opinion polls showed that the people did not want a federation and supported two states. Replying to a question, Tatar said that they share the same view with Turkey on the issue of the two-state solution and recalled that Turkish officials had made many statements to this effect.

Furthermore, the prime minister argued that a TRNC with a strong economy was a pre-condition and added that Turkey needed a strong TRNC. He further added: “The drilling [for hydrocarbons] has increased Cyprus’ importance. Turkey needs the TRNC from the point of view of its sea and air space. Turkish President Erdogan refers to the protection of Turkey’s and the TRNC’s rights not only on land but also in the air and in the sea. And we say that if the TRNC is strengthened, Turkey will also be strengthened”.

Referring to the case of the Polly Peck Company defrauded by its owner Asil Nadir and the allegations that he [Tatar] could not travel abroad, Tatar said that he had worked at Polly Peck 35 years ago and whenever there were elections some circles tried to harm him. He noted that he did not know that he had any problem as regards his work at Polly Peck. 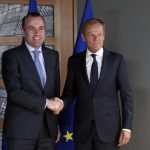