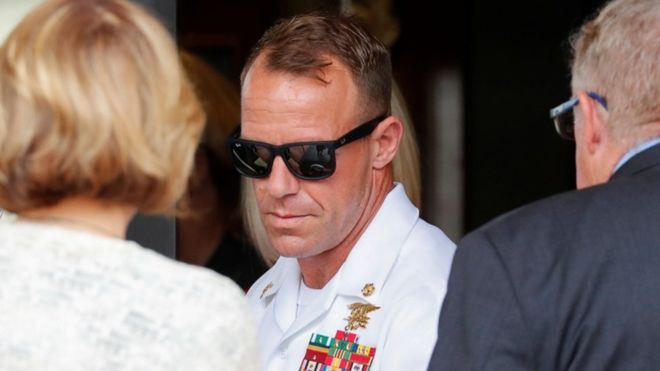 A US Navy Seal who was accused of war crimes is expected to be ousted from the elite force, despite being cleared last week by President Donald Trump.

He was acquitted of those charges and convicted only of the lesser charge of posing with the IS prisoner’s corpse.

Mr Trump cleared him of wrongdoing, against advice from defense officials.

In doing so the president reversed a single-rank demotion handed to Chief Petty Officer Gallagher for posing with the corpse, bringing to a close one of the most high-profile war crimes cases in the US Navy’s history.

According to reporting by the New York Times and other US media outlets, Chief Gallagher will appear before Navy leaders on Wednesday and is expected to be stripped of his membership of the Seals.

The commander of the Seals, Rear Admiral Collin Green, reportedly has the backing of Admiral Michael Gilday, the chief of naval operations, and Richard Spencer, the secretary of the Navy, in seeking to dismiss Gallagher.

But the plan to strip Chief Gallagher of his Trident pin – symbolizing his membership of the Seals – could put the Navy’s most senior officials on a collision course with the president, who is the commander in chief of all of the US armed forces.

Mr Trump has drawn criticism from parts of the military after pardoning army officers convicted of war crimes. The president last week pardoned Clint Lorance, a former Army lieutenant, freeing him from a military prison where he was serving a 19-year sentence for the murder of two Afghan civilians.

The president also ordered the full pardon of Major Mathew Golsteyn, who was facing murder charges for killing an unarmed Afghan.

Rupert Colville, the human rights spokesman for the United Nations, said on Tuesday he was “very concerned” by Mr Trump’s decisions, which he said sent a “disturbing signal to militaries all around the world”.

The White House defended the pardons, saying in a statement: “As the President has stated, ‘when our soldiers have to fight for our country, I want to give them the confidence to fight.'”

Efforts to strip Chief Gallagher of his Seals membership reportedly began earlier this month but stalled after the White House refused to approve the plan.

Chief Gallagher’s lawyer, Timothy Parlatore, told the New York Times he thought Admiral Green would be dismissed by the president if he removed his client’s Trident pin. 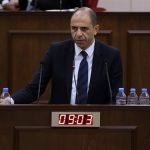 Özersay: “The flag is a sensitive issue for all communities” 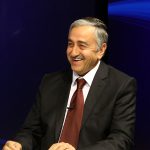