In his speech at the conference organized by Bahçeşehir Cyprus University Research Centre of the Law of Sea and Maritime entitled “Changing World Order: Blue Wars in the Eastern Mediterranean”, Dugin said that the world departed from single pole inclinations and turned into a multiple pole conflict centre. 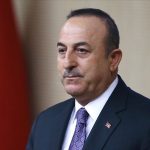 Çavuşoğlu: ‘We will not sit at the negotiating table just for the sake of negotiating on the Cyprus Issue’