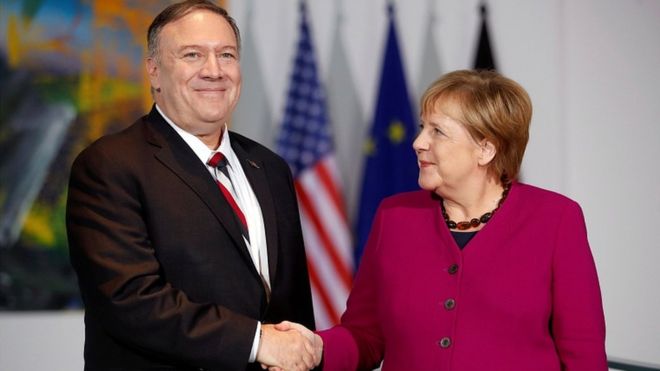 US Secretary of State Mike Pompeo has warned of the dangers posed by Russia and China, and called on Nato to grow and confront “the challenges of today”.

On a visit to Berlin, Mr Pompeo said methods used by China to suppress its own people would be “horrifyingly familiar” to East Germans.

And he accused Russia of invading its neighbours and crushing dissent.

He laughed off comments from French President Emmanuel Macron, who said recently that Nato was “brain dead”.

But Mr Pompeo told reporters: “Seventy years on… it needs to grow and change. It needs to confront the realities of today and the challenges of today.

“If nations believe that they can get the security benefit without providing Nato the resources that it needs, if they don’t live up to their commitments, there is a risk that Nato could become ineffective or obsolete.”

US President Donald Trump has frequently accused European Nato members of failing to provide their fair share of military spending and of relying too heavily on the US for their defence.

Nato celebrates its 70th anniversary at a summit in London next month.

What else did Mr Pompeo say?

He was speaking in Berlin a day before the 30th anniversary of the fall of the Berlin Wall.

Referring to that event, Mr Pompeo said “the West – all of us – lost our way in the afterglow of that proud moment”.

He said the US and its allies should “defend what was so hard-won… in 1989” and “recognise we are in a competition of values with un-free nations”.”We thought we could divert our resources away from alliances, and our militaries. We were wrong,” he said.

A rallying cry – but not everyone agrees

In Berlin to remember the end of the first Cold War, US Secretary of State Mike Pompeo appeared to be declaring the outbreak of a second.

In insisting upon a “competition of values” between the “free nations” on the one hand, and Russia and China on the other, his was a message of ideological struggle.

He disparaged entirely the idea of Moscow being a partner for the West. Mr Pompeo clearly saw this speech as a rallying cry to the West. He struck a hawkish tone but many will wonder: What exactly is the fundamental US view?

President Trump seems much less antagonistic towards Moscow and does not appear to share the strategic framework in which his secretary of state places relations between Moscow and Beijing, and the West.

It is clear that even many of Washington’s allies do not fully share Mr Pompeo’s strident analysis. And Moscow and Beijing are eager to exploit such tensions and divisions.

Relations between Washington and Moscow plummeted after Russia annexed the Crimean peninsula from neighbouring Ukraine in 2014.

Ties were further strained when US intelligence agencies concluded that the Kremlin had interfered in the 2016 presidential election.

Despite this, President Trump and President Putin have appeared to be on good terms personally. On Friday, Mr Trump said he was considering attending the Victory Day celebrations in Moscow next May, after an invitation from the Russian leader.

What did Mr Macron say?

Interviewed by the Economist, the French president said he saw a waning commitment to the alliance by its main guarantor, the US.

He warned European members that they could no longer rely on the US to defend the alliance, established at the start of the Cold War to bolster Western European and North American security.

He cited the recent failure by Washington to consult Nato before pulling forces out of northern Syria.

Speaking in Berlin alongside visiting Nato Secretary-General Jens Stoltenberg, she acknowledged there were problems, but said she did not think “such sweeping judgements are necessary”.

“Well said. Truthful words, and ones that get to the nub of the matter,” she posted on Facebook. 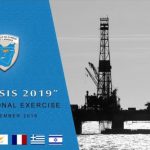 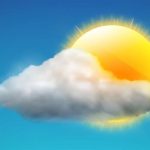 Sunny and fine weather over the weekend