U.S. lawmakers voted to impose sanctions on Turkey and in favor of the Armenian claims because Ankara spoiled the game in Syria, said Turkey’s foreign minister on Wednesday.

“There were efforts to establish a terror state there [in northern Syria],” Mevlut Cavusoglu told reporters.

“Through the steps and moves that we took, we’ve spoiled this game through deals with both the U.S. and Russia, firstly at the table, and later on the ground.”

“They are trying to take vengeance for this,” Cavusoglu added.

Turkey earlier Wednesday summoned the U.S. ambassador in Ankara after the House of Representatives — Congress’ lower house — passed a resolution to recognize the so-called “Armenian genocide.”

U.S. lawmakers also passed a bill seeking to impose sanctions on Turkey over its Operation Peace Spring in northern Syria, an operation meant to clear the region of terrorist elements and pave the way for Syrian refugees in Turkey to resettle there.

On the Armenian resolution, Cavusoglu said Turkey had voiced its objection and expectations by summoning the U.S. ambassador and declaring the measure “null and void.” 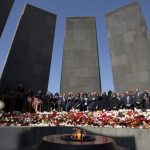 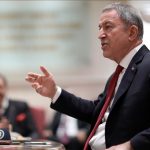