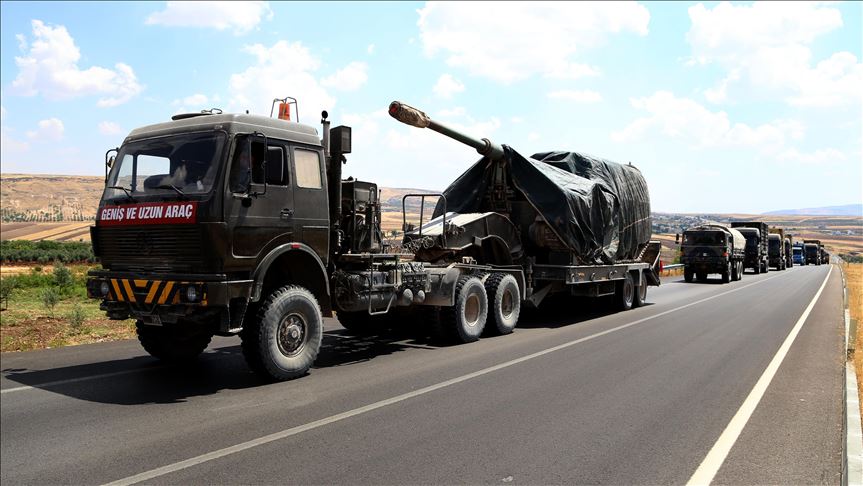 Operation Peace Spring has effectively prevented the emergence of a subversive statelet at Turkey’s doorstep and put an end to the YPG/PKK terrorist network’s territorial plot in Syria. This geopolitical achievement is above everything for Ankara. At this point, one cannot help but ask the million-dollar question: Does the failure of this fait accompli autonomy project remain the underlying reason for some reactions, mostly using the humanitarian guise, against Turkey’s military campaign? If so, let us give a sobering call.

Operation Peace Spring has centered on a multi-stage, ambitious plan. First, being a cross-border counter-terrorism effort in essence, it aimed at clearing the YPG/PKK terrorist presence along the Syrian frontier. In doing so, gaining tactical depth remained militarily crucial to secure the border areas. Since the outset of the operation, the YPG/PKK militants’ indiscriminate shelling and systematic use of unguided munitions already claimed tens of civilians lives in Turkey. Ankara faced a similar challenge before and during Operation Euphrates Shield back in 2016, at a time when Daesh’s rocket salvos stormed the border cities. Turkish defense planners responded to the threat by rapidly pushing deeper into Daesh-controlled areas, and eventually, capturing al-Bab which hosted the principal rocket production and storage facilities of the terrorist group west of the Euphrates.

Resembling Operation Olive Branch, which dispatched 72 aircraft to strike more than 100 targets in the beginning, the Peace Spring’s overture also witnessed massive firepower, marking more than 200 targets hit by land-based fire-support elements and the air force within 12 hours. Apparently, fielding overwhelming firepower at the outset hybrid warfare efforts has become the epicenter of the Turkish military’s CONOPS (concepts of operations) against asymmetric threats.

In the forthcoming ground offensive phase, Peace Spring has concentrated the bulk of combat formations along Tel Abyad and Ras al-Ayn, while the air force penetrated deeper to pound critical lines of communications and rear areas supporting the PKK/YPG positions. In the meanwhile, the Syrian National Army elements cut into the M4 highway in the south, effectively hampering the PKK/YPG militant’s freedom of movement through this critical supply route.

Specifically in Ras al-Ayn, the PKK/YPG’s tunnel network had caused some temporary challenges to the operation’s advance. One can recall that such tunnel complexes were also sources of concern during Operation Euphrates Shield and Operation Olive Branch. Probably, from now on, Turkey’s burgeoning defense industries will focus on developing subterranean warfare capabilities which is a bitter reality of the contemporary Middle East. To address the subterranean challenge, particularly, unmanned ground robotics with more autonomy could provide effective solutions.

Overall, Turkey is learning its military lessons. In each expeditionary Syria campaign, namely the Euphrates Shield, the Olive Branch, and lastly the Peace Spring, Ankara has registered notable improvements in force generation, planning, and CONOPS. More importantly, the Turkish Armed Forces and the national defense technological and industrial base (DTIB) have gained an invaluable hybrid warfare experience in the face of dangerous terror groups like Daesh and the PKK/YPG.

Operation Peace Spring showed that military power has proven to be a game-changer when used wisely with crystal clear political objectives. By flexing its military muscles, Ankara secured two separate deals with Washington and Moscow.

The negotiations with the U.S. enable Turkey’s effective control between Tel Abyad and Ras al-Ayn with some 30-kilometers (18.64-miles) deep safe zone. Ankara enjoys a larger marge de maneuver in this area. The deal secured with Russia will bring Turkish-Russian joint patrols 10-kilometers (6.2-miles) deep, along with full withdrawal of the PKK from the safe zone (noting that Qamishli was kept out of the deal).

More importantly, the declaration of the Sochi meeting between President Erdogan and President Putin highlighted the essential role of the Adana Agreement as a principal element of building a future in Syria. Building more feasible verification mechanisms for the Adana Agreement will take time and effort. Besides, the risk of close encounters between the Syrian Arab Army and the Turkish Armed Forces (as well as the Syrian National Army) should be averted carefully.

How to lose a NATO ally?

The PKK/YPG portfolio marked one of the most critical moments in the Turkish-American relations. While there are many issues popping-up, the Gordian Knot revolves around the real meaning of the PYD/YPG in the eyes of Washington. More importantly, linking the bilateral disagreements on the PKK offshoots to the NATO agendas could bring about very unfavorable outcomes.

Back in 2016, during his testimony to the Senate, Secretary of Defense Ashton Carter told that the PKK was a designated terrorist organization not only in Turkey but also in the US. Secretary Carter also added that he was aware of the ‘substantial ties’ between the YPG and the PKK, so that the U.S. agenda with the YPG-related groups would be transactional and limited to anti-Daesh operations. Perhaps ironically, Ashton Carter made this statement in response to Senator Lindsey Graham’s remarks, criticizing the Obama administration’s particular policies as to the PKK-offshoots in Syria. However, on Oct. 7, 2019, Senator Graham tweeted that he was working on a bipartisan sanctions plan with his democrat colleague, Senator Chris Van Hollen, to suspend Turkey from NATO, should Ankara launch a cross-border effort into northeastern Syria. Well, for starters, member nations’ legislative bodies do not involve any mechanism to suspend an allied state’s membership to the North Atlantic Alliance. Furthermore, the PYD/YPG problem, along with the bilateral divergences between Ankara and Washington with respect to Syria, are not NATO related issues. The NATO alliance, on the other hand, is centered on the Article 5 and the casus foederis built around it. Using NATO membership suspension threat as a foreign policy leverage, especially in a bilateral disagreement, would endanger the security guarantees of the alliance in broader corners of the world.

Let us put it this way, would Senator Graham call for suspensions of, say, Poland or Estonia from NATO, in case of a bilateral dispute with Warsaw or Tallinn? I think everybody knows what ‘yes’ or ‘no’ answers would mark, and there is no harmless answer to this question. While a ‘yes’ would be tantamount to the practical collapse of the Article 5 guarantees, ‘no’ would mean that Turkey is to face double standards.

Notably, at the time of writing, social media resources suggested an influential SDF figure’s testimony in the Capitol Hill, asking for the suspension of NATO’s Article 5 for Turkey due to its recent military campaign in Syria. This is a dangerous sign for the alliance’s cohesion and future. Be it PKK offshoots or another entity around the world, if we want to keep NATO working for the next 70 years, a shady armed non-state group should not be allowed to question the solidity of the article 5 guarantees for a member nation, especially in another member state’s legislative body.

All in all, the feasibility of a PKK-controlled fait accompli in Syria seems to be geopolitically over.

At the time being, despite its achievements in the battleground, Ankara should revisit its strategic communications and information operations capacity which marked the Achilles heel of the Peace Spring. Moscow should work on safeguarding the Adana Agreement and keeping the Baath regime away from its old, dirty habits. And the West, swiftly and soberly, should decide if it is a wise decision to risk Turkey’s strategic NATO identity for the sake of the YPG/PYD in Syria. Indeed, information environment in the cyber-space might be very anti-Turkey nowadays, and it is probably easy to jump in the ongoing trend. However, Western capitals have to see the very fact that Operation Peace Spring’s political-military objectives have already secured a broad social consensus in the Turkish public opinion that go well beyond domestic issues of the nation.