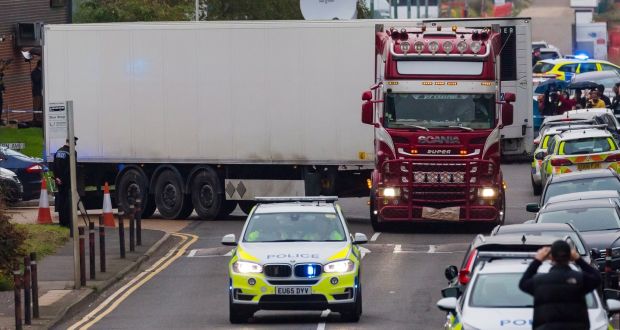 The 39 people found dead in a refrigerated trailer in Essex were Chinese nationals.

Police are continuing to question lorry driver Mo Robinson, 25, on suspicion of murdering the eight women and 31 men.

Officers in Northern Ireland have raided three properties and the National Crime Agency said it was working to identify “organised crime groups who may have played a part”.

The trailer arrived in Purfleet on the River Thames from Zeebrugge in Belgium.

Ambulance staff discovered the bodies in the container at Waterglade Industrial Park in Grays just after 01:30 BST on Wednesday.

The lorry and trailer left the port at Purfleet shortly after 01:05.

Police said the tractor unit – the front part of the lorry – entered the country via Holyhead in Wales on Sunday, having travelled from Dublin.

Councillor Paul Berry said the village of Laurelvale in County Armagh, where the Robinson family live, was in “complete shock”.

He said he had been in contact with Mr Robinson’s father, who had learned of his son’s arrest on Wednesday through social media.

“The local community is hoping that he [Mo Robinson] has been caught up innocently in this matter but that’s in the hands of Essex Police, and we will leave it in their professional hands to try to catch the perpetrators of this,” he said.

The lorry has been moved to a secure site at Tilbury Docks so investigations could be “conducted in peace” and to give the “utmost dignity to those within the trailer”.

Essex Police said it was the largest murder investigation in the force’s history and the victims were all “believed to be Chinese nationals”.

It said formal identification of the 39 people, one of whom is a young adult woman, “could be a lengthy process”.

China’s ambassador to the UK Liu Xiaoming tweeted that the embassy had read the reports of the deaths “with heavy hearts” and was in close contact with British police.

Police initially suggested the lorry could be from Bulgaria, but later said officers believed it entered the UK from Belgium.

A spokesman for the Bulgarian foreign affairs ministry said the truck was registered in the country under the name of a company owned by an Irish citizen.

The Belgian Federal Public Prosecutor’s Office said the container arrived in Zeebrugge at 14:29 on Tuesday and left the port later that afternoon.

It was not clear when the victims were placed in the container or if this happened in Belgium, a spokesman said.

A spokesman for C.RO Ports, which operates terminals at Purfleet and Zeebrugge, said they would “fully assist” the police investigation.

Lucy Moreton, from the Immigration Services Union, said the sheer number of containers coming into the UK every day made it impossible to look inside them all.

“We don’t have the facility to check the vast majority of freight which arrives in the UK, whether it moves or not,” she said.

“But it’s certainly the case that disconnected freight containers, which are then transported separately, are somewhat less likely unless we have intelligence to the contrary that suggests we need to do that.”

The Home Office said it searched lorries and containers “on a targeted basis using a range of different technologies”.

He told BBC Radio 4’s Today programme even if there were routes perceived as easier to get through, organised criminals would still exploit people who could not access those.

“You can’t turn the United Kingdom into a fortress,” added Mr Sawyer, who is the Chief Constable of Devon and Cornwall Police.

Police officers and councillors have signed a book of condolences which was opened at Thurrock Council’s chambers.

A vigil is also being held at 18:00 outside the Home Office to “call for urgent action to ensure safe passage” for people fleeing war and poverty.

Thurrock’s Conservative MP Jackie Doyle-Price said there needed to be an international response.

“We have partnerships in place but those efforts need to be rebooted, this is an international criminal world where many gangs are making lots of money and until states act collectively to tackle that it is going to continue,” she said.

Richard Burnett, chief executive of the Road Haulage Association, said temperatures in refrigerated trailers could be as low as -25C.

He described conditions for anyone inside as “absolutely horrendous”.

How many migrants have died in transit?

The number of migrants who die in transit has been recorded by the UN since 2014.

Since then, five bodies of suspected migrants had been found in lorries or containers in the UK before this tragedy.

Data was not collected in the same way before the migrant crisis began in 2014, but such deaths are not new.

In 2000, 58 Chinese migrants were found suffocated to death in a lorry at Dover.

In 2015, the bodies of 71 people were found in an abandoned lorry on an Austrian motorway. Police suspected the vehicle was part of a Bulgarian-Hungarian human trafficking operation. 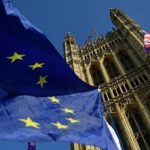 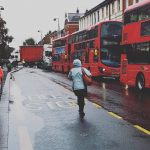 TRNC: A working group has been created to plan the economy