A British teenager accused of lying about being gang-raped in Cyprus said she could not have produced the confession statement which prosecutors claim she wrote because the document is ‘not in proper English’.

The 19-year-old accused young 12 Israeli men of raping her during a working holiday in the party town of Ayia Napa in July this year.

Now on trial accused of inventing the claim, she says she was forced to sign a false statement dictated by Greek Cypriot police.

In court she said there was ‘no way’ she would have written the statement of her own free will because it was in ‘Greek English’ rather than ‘proper English’.

‘I’m very well educated, I’m going to university. I’ve got an unconditional offer so there is no way I would write a paragraph like this of my own free will,’ she said.

‘It does not make grammatical sense….there is not one sentence there that an English person would write.’ 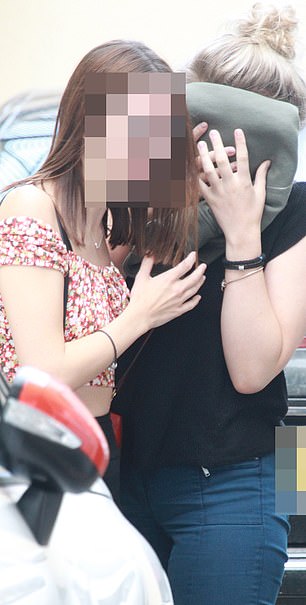 The teenager (face covered), who has been charged with public mischief, arrives at court and is seen being supported by a close friend

The Briton said she was forced by police to make the retraction statement and did so because she feared she would be kidnapped or killed.

She added that she was so scared by the police officer’s style of questioning that she feared for her life.

‘In the police station and the way Marios [Christou] was approaching me and shouting at me to stop crying, I felt vulnerable,’ she said during the court hearing.

‘I felt like I was in danger because he wasn’t going by the law, I wasn’t allowed a lawyer.

‘I immediately assumed corruption and conspiracy so I wouldn’t put it past him, I wouldn’t be surprised if at that moment he would have kidnapped me and killed me.’

Prosecutors say she willingly wrote and signed the document, which was shown to her at Famagusta District Court, in Paralimni.

The teenager has been charged with ‘making public mischief’ and faces a year in jail and a £1,500 fine if she is convicted. She spent four and a half weeks in jail before she was released on house arrest.

But she cannot leave Cyprus, has had her passport confiscated, has been placed on a ‘no-fly’ list and lost her place at university.

The young girl was hoping her ordeal would come to an end this week, with a verdict delivered by a judge at the Famagusta District Court at Paralimni.

But the case was adjourned until November 1 when a British psychologist will give evidence via video link at the next hearing at Larnaca District Court.

The court will hear about the girl’s mental state as she claims she was suffering from post-traumatic stress syndrome (PTSD) when she signed the purported statement.

The bail conditions were not altered meaning the girl cannot leave Cyprus and must report every week at a police station.

The case could take up to another eight weeks to conclude leaving the girl stranded in Cyprus until December.

Speaking outside the court the Briton’s lawyer Michael Polak said the teenager was upset that the case could last until Christmas.

‘She wants to get home as soon as possible,’ he said. ‘She also wants justice to be done. So she is determined to stay here until that happens.

He said despite the latest adjournment they were still hoping the case would be done before the year’s end.

‘It could drag on [until Christmas]. But we hope it will be done as soon as possible. It’s really hard to say.’

He added: ‘With regards to her returning to the United Kingdom an application was not made today because the next hearing is within a short period of time.’

The lawyer, who works for legal pressure group Justice Abroad, also highlighted what he said were the many flaws in the Cypriot criminal system.

He said in terms of the rape allegation there were things the officials could have done better, such as seizing of the communication evidence and holding an ID parade. 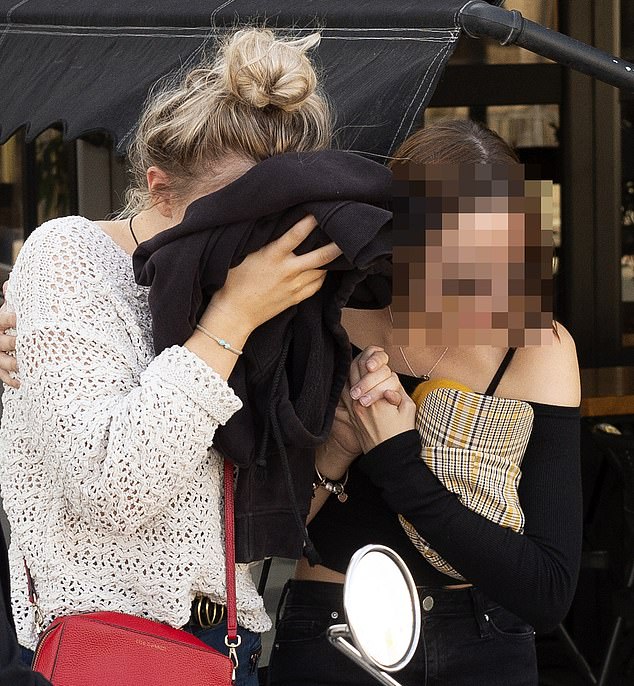 A 19-year-old Briton on trial in Cyprus at court yesterday. She’s in court after allegedly making up a claim of gang rape says she was forced to retract her allegation by a ‘corrupt’ officer who put her in fear of her life

‘So what the police have done is they have arrested a whole group of people and they have not had an ID parade for her to identify who was and wasn’t involved in this.

‘Securing the scene; we have had evidence in the last few days that the scene wasn’t secured and Israeli TV showing journalists going in there the very next morning.

‘I think there are many learning points there.’

He said there were also issues with how there appeared to be no recording of what happened at the police station.

‘It remains that nothing is recorded there. There is not even a proper paper record of what actually takes place in a police station,’ he said.

‘So I think that is something that needs to be dealt with.’

The 19-year-old woman, who MailOnline is not identifying, broke down in tears as she was cross-examined for more than three hours in the court room in Cyprus. 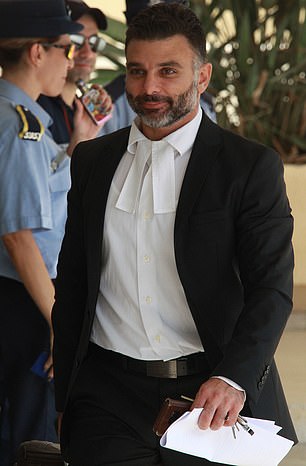 Prosecutors say the woman told police she was attacked by 12 Israeli men while on holiday, but later retracted her claims

The teenager wept as she admitted lying to her mother in a text sent from the police station which said: ‘Trust me, I’m OK.’

State Prosecutor Adamos Demosthenos asked why she had not told her mother in these messages that she was in danger.

‘Your life is in danger and you were trying to calm your mother down?’ he asked.

The woman replied: ‘I love my mum. She is everything to me.

She said: ‘I think any child will lie to their parents to tell them they are OK because parents don’t stop worrying about their child.

‘If your child had just been raped by 12 Israelis and would not get out of bed, was taken to a police station for what turned out to be eight hours, I can tell you that you would be worried about your child.’

During the cross-examination, she added that she was being treated for possible infection to HIV following the alleged gang rape and was taking eight tablets a day when she was called in for questioning ten days later on July 27.

She said: ‘I was taking HIV tablets, antibiotics and anti-inflammatories. My neck was so swollen I could hardly breathe.’

The court heard she was taken for questioning at the Paralimni police station after detectives were allegedly given footage of the girl enjoying consensual group sex.

‘Marios told me he had videos of me having consensual group sex,’ the Briton told the court.

The woman initially claimed that she consented to sex with one boy who she knew at this hotel in Ayia Napa, before the rest of the group burst in and attacked her 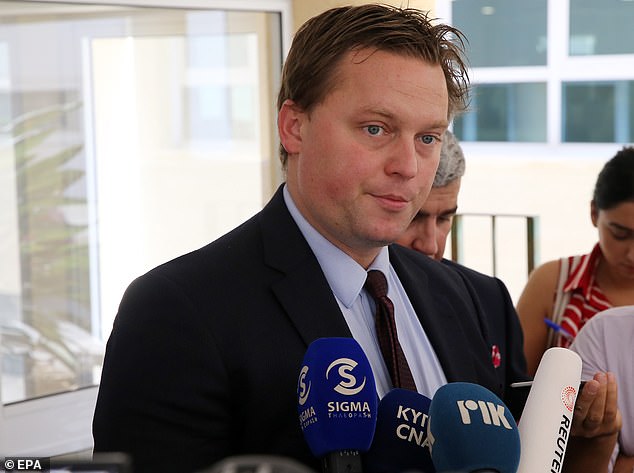 The woman’s lawyer, Michael Polak, can be seen here giving a statement about the case earlier this month. He said that the 18-year-old had done well under intense cross-examination and answered all the questions without trying to avoid any

‘I asked to see them because it wasn’t true. He did not show them to me.’

The teenager said she suffered from PTSD after blaming herself for a horse-riding accident after which the animal had to be put down. She said that she suffered similar symptoms following the alleged rape.

‘After it happened, even if a man was within a metre of me it would make me feel horrible, but they wouldn’t make me feel threatened for my life,’ she said.

The girl claimed that she was terrified that the British police in Cyprus might intervene and make things worse if she raised the alarm about how she was being treated in custody.

She said: ‘I feared that if … the British police [got] involved I would not be allowed out alive, because I was in fear of my life.’

As Judge Andreas Papathanasiou adjourned the hearing, the 19-year-old fled the court in obvious distress.

Speaking outside the court, her legal team praised her bravery in the face of hostile questioning. 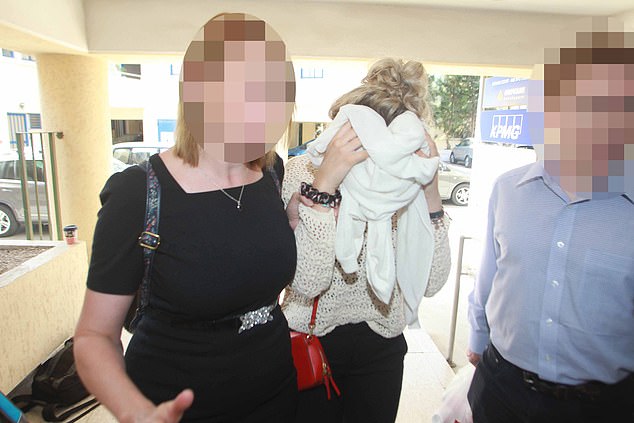 British lawyer Michael Polak said: ‘She was cross-examined for over three hours. She did very well. It’s not easy for anyone but she answered every question.

‘She did not try to avoid any of the questions asked of her during a long ordeal.

‘We say not only was her evidence convincing it is supported by the SnapChat evidence which show what was happening to her at the time.

‘One can only imagine how upsetting this would have been for an 18-year-old who was taken to a police station and kept there for eight hours.’

The teen denies causing public mischief by allegedly lying about the attack.

The young Briton, who is being supported by her mother and legal pressure group Justice Abroad, has received almost £40,000 in donations in crowd-funding via a GoFundMe page.

The 12 young Israeli men arrested in connection with the allegations all returned home after they were released.

12 teens arrested on suspicion of raping British woman are released 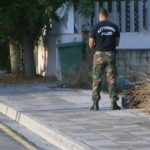 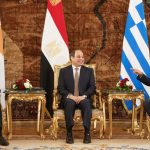