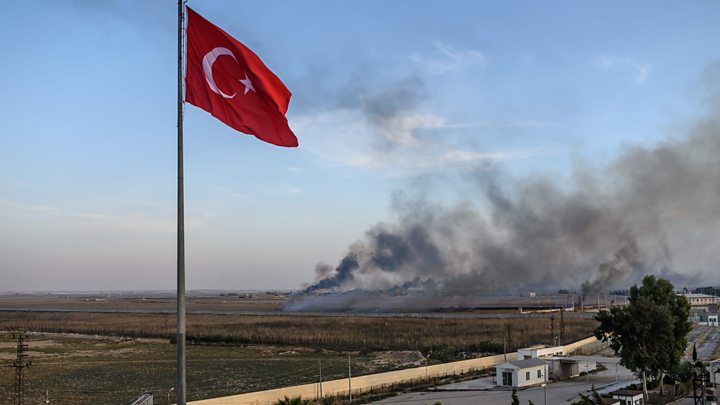 The pressure is building in the US to stop Turkey from continuing its offensive against Kurdish-held areas in Syria.

He has said he would like the US to negotiate a truce between Nato ally Turkey and the Kurds.

According to the UN more than 100,000 people have fled their homes since the offensive began on Wednesday.

President Erdogan says he wants to create a “safe zone” in northern Syria free of Kurdish militias which could also be home to Syrian refugees.

As the crisis deepened, US troops said they had come under fire from Turkish artillery on Friday.

What is the latest?

The Kurdish-led Syrian Democratic Forces (SDF) – a key US ally in the region – are facing numerous Turkish ground and air assaults along a stretch of the Turkey-Syria border about 75 miles (120km) long, correspondents say.

Dozens of fighters from the SDF and pro-Turkish factions have been killed. Turkey’s military confirmed the first death of a Turkish soldier and said three others had been wounded.

At least 11 civilians have been killed and humanitarian groups say the number of people affected will rise.

On Friday, the Pentagon said its base near the northern Syrian town of Kobane had seen shell fire from Turkish positions.

Navy Captain Brook DeWalt said the area was “known by the Turks to have US forces present”.

“All US troops are accounted for with no injuries,” he said in a statement. “The US demands that Turkey avoid actions that could result in immediate defensive action.”

What is the US doing?

Defense Secretary Esper insisted that the US had not abandoned its Kurdish allies and warned of unspecified “serious consequences” for Ankara if it did not halt the assault.

“We can shut down the Turkish economy if we need to,” he said.

President Trump spoke briefly about the situation as he prepared to head to a rally on Friday, saying: “We don’t want them killing a lot of people… if we have to use sanctions we will.”

Meanwhile, in Congress, lawmakers from both sides of the political divide were preparing legislation to pile pressure on Turkey.

A bill to issue sanctions against Turkish officials and banks involved in the offensive was introduced by the Democratic chairman of the House of Representatives Foreign Affairs Committee, Eliot Engel, and the committee’s ranking Republican Mike McCaul.

What has Turkey said?

“Now there are threats coming from left and right, telling us to stop this,” President Erdogan said on Friday. “We will not step back.”

He previously threatened to send some of the 3.6 million Syrian refugees it hosts to Europe if the offensive was described as an occupation.

What are the humanitarian fears?

A refugee crisis is developing. The UN’s Office for the Co-ordination of Humanitarian Affairs (OCHA) gave the figure of 100,000 but aid groups say as many as 450,000 people could be forced to move.

According to aid workers on the ground, the vast majority of civilians have fled Tal Abyad and those who remain fear for their lives.

OCHA said the Turkish bombardment had affected key civilian infrastructure such as water stations. Thousands of people could lose adequate access to clean water in the Hassakeh region, it reports.

Turkey wants to create a “safe zone” running for 480km (300 miles) along the Syrian side of the border but says it will not advance deeper than a planned 32km limit. 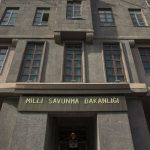 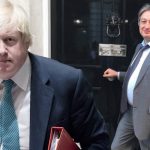 Anastasiades: Turkey should be stripped of EU candidate status