The current finance director, Clotilde Delbos, has been appointed to run the business on an interim basis.

Renault’s move comes close on the heels of the decision by its industrial partner Nissan to appoint a new chief executive earlier this week.

Mr Bolloré has described the manoeuvering against him as a “strong-arm coup”.

As corporate bloodlettings go, this was brutal and ruthless.

Mr Bolloré told a French newspaper that he only became aware of attempts to get rid of him when he stepped off a plane in Paris in the early hours of Wednesday morning.

Renault chairman, Jean-Dominique Senard was behind the move and appears to have had the endorsement of the French government, a 15% shareholder in Renault.

Mr Bolloré was appointed in January, in the wake of a major scandal involving his predecessor, Carlos Ghosn.

Mr Ghosn, who was also chairman of Nissan and presided over the global alliance between Renault, Nissan and Mitsubishi, was arrested in Tokyo last year.

He remains in custody on charges of financial wrongdoing, which he denies. He claims he was a victim of a plot orchestrated by Nissan executives, who were anxious to prevent a merger between the company and its French partner.

The fallout from his arrest has been severe, triggering a period of intense infighting within the Nissan boardroom and poisoning the relationship with Renault.

Since then, both companies have seen a steep fall in profits, while Nissan has been further tainted by financial scandal.

Earlier this week, Nissan appointed a new chief executive, Makoto Ushida, in an effort to stop the rot, get the company back on track and smooth ruffled feathers at Renault.

The removal of Mr Bolloré – once a close associate of Carlos Ghosn – may also have been intended, at least in part, to heal the rift between the two companies, although it is understood the the poor performance of the business itself was a major factor.

So where does all this leave the Renault-Nissan-Mitsubishi Alliance, collectively one of the world’s biggest car manufacturing groups?

The links between them are strong – Renault has a 43% shareholding in the Japanese firm, their logistics networks are heavily intertwined, and they share a range of technology. Unwinding all that would not be easy.

But insiders say the damage done by the upheaval of the past year runs deep within the fabric of both businesses. So keeping them together, and restoring a cordial relationship may not be easy. 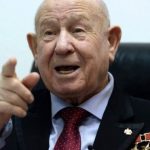 Cloudy with some showers and light dust

“If the Zoning Plan is not implemented, there is no point in this coalition partnership”

Özersay: Do not despair, these hard days will pass