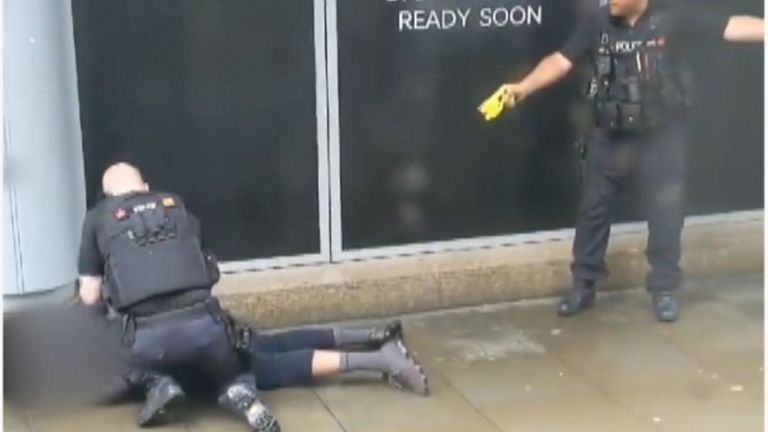 Mobile phone video from the scene showed an officer pointing a Taser at a man lying on the ground with an officer on top of him.

A man has been arrested on suspicion of terrorism offences after three people were stabbed at a shopping centre in Manchester, police have said.

He began “lunging and attacking people with the knife” before being confronted by two unnarmed police community support officers (PCSO).

“He then chased them with the knife while they were calling for urgent assistance. The man began attacking people around him,” Mr Jackson said.

Five people were injured, he added, “but although the injuries are nasty, we are told that thankfully, none of them are life-threatening”.

The attacker’s motivation is not known, MrJackson said, but police believe he acted alone before being seized by armed officers.

The senior officer recognised that the “frightening” attack was likely to bring back memories of the “awful events of 2017”, when a suicide bomber killed 22 people by detonating a device at an Ariana Grande concert at nearby Manchester Arena.

Footage from the Arndale scene showed an officer pointing a Taser at a man lying on his front on the ground, apparently struggling, with a second officer kneeling on top of him.

Different video showed him being dragged away by officers.

Earlier, GMP had said five people were stabbed, but the force has now confirmed that three were wounded and taken to hospital.

“A man in his 50s has also been taken to hospital with stab wounds.

“A fourth victim – a woman in her 40s – who was not stabbed – has been assessed and did not need to go to hospital following assessment by paramedics.”

Prime Minister Boris Johnson tweeted: “Shocked by the incident in Manchester and my thoughts are with the injured and all those affected. Thank you to our excellent emergency services who responded and who are now investigating what happened.”

NWAS said they were called to the incident, to which a “large number” of staff and 13 ambulances were sent, at 11.17am and stood down just before 2pm.

Zaid Alrashdi, who works in a fruit shop in the centre, said he “heard people screaming” at around 11.15.

Investigating, he saw a woman who was “crying and screaming”. She was “in a corner near a cash machine”.

He then saw police outside Starbucks and armed police arrived soon afterwards and urged everyone to leave, he said.

A shop worker, who gave his name only as Jordan, 23, described a man “running around with a knife lunging at multiple people” – and said someone had come into the store “visibly shaken with a small graze”.

He added: “Soon after, security staff told all retail staff to close their doors and move the public to the back of the stores.”

Jordan, who has only been working at the centre for a few months, said the attack took place on the ground floor.

Freddie Houlder, 22, from Market Drayton was in the Arndale centre when he heard “a load of screams just outside” the shop he was in.

Mr Houlder added: “Luckily she had quite a thick jacket – she thought originally it was a fake knife because of how easily it grazed off but police came in and said it was a real knife and she burst in to tears.

“I definitely don’t think it was gang violence because this guy was going around trying to stab random people, I believe,” he added.

Home Secretary Priti Patel tweeted: “Very concerned by the incident in Manchester. My thoughts are with those affected. I am, as always, very grateful to the police for running towards danger to keep us safe. Now important they are given space to carry out their investigation.”

Bev Hughes, Greater Manchester’s deputy mayor for policing, said the scene had been secured and praised the city’s emergency services for their “swift and professional action”.

Councillor Nigel Murphy, deputy leader of Manchester City Council, thanked police and urged people to stay away from the scene. 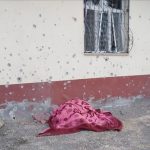 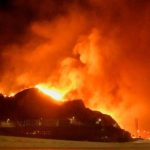