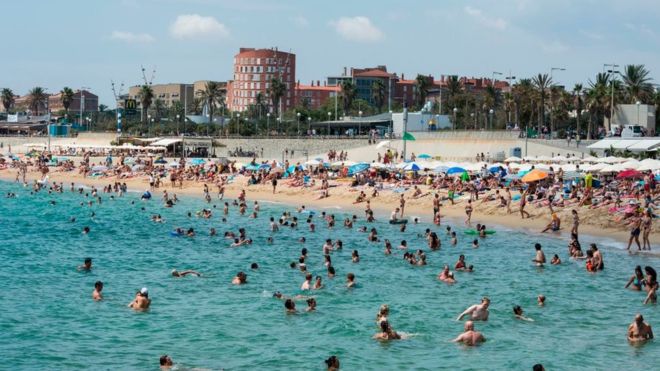 Thomas Cook has approached the government in a bid to plug the gap in funding it needs to satisfy lenders.

The travel company could fall into administration this weekend unless it finds £200m in extra funds needed to secure its future.

Banks, including RBS and Lloyds, insist the firm comes up with the new contingency funds in case it needs extra money during the winter months.

Sources insisted there were still “reasonable prospects” of a deal and suggested the government could help.

But they added that the coming 24 hours were crucial to the travel group’s survival.

“We do not speculate on the financial situation of individual businesses,” the Department for Transport said in a statement.

The troubled operator hoped to seal a rescue led by China’s Fosun this week. But the creditor banks issued a last-minute demand that the travel company find an extra £200m.

Sources have confirmed the Civil Aviation Authority is on standby with a repatriation contingency plan called Operation Matterhorn. The potential cost of bringing home passengers is put at about £600m.

The CAA said it would not comment on the financial situation of individual businesses.

Teacher Jacqui Cunningham and her partner, train driver Angus McNair, from Brentwood, Essex, have booked a holiday to the Maldives with Thomas Cook for December. The luxury trip is to celebrate Ms Cunningham’s recovery from cancer.

Thomas Cook is, of course, still operating. But their predicament underlines the anxiety many customers are feeling.

Ms Cunningham and Mr McNair called the customer service helpline and asked if they could delay paying the £8,000 until they know that the tour operator is not going to fall into administration. But they were told the deadline remains, or they would lose their £500 deposit.

“We were going to pay on a debit card, but now I think we’ll put it on the credit card if we go forward,” Ms Cunningham told the BBC.

But Thomas Cook’s financial difficulties have mounted over the past year, culminating with the agreement in August of a rescue deal led by its biggest shareholder Fosun, that would see the Chinese firm back refinancing of the 179-year-old British firm.

In July, Thomas Cook produced a business plan saying that it needed £900m in refinancing, up from a previous estimate of £150m. The £900m would come from Fosun, the group of creditors and some other investors.

The group of lenders then commissioned an independent investigation. Its financial advisers said Thomas Cook would require an additional £200m on top of the £900m already required, which would bring the total refinancing needed up to £1.1bn.

Thomas Cook succeeded in finding a backer to provide the additional £200m, but the BBC understands that the backer has now pulled out and the group of creditors will not come back to the table unless that additional funding is found.

A final vote on that deal was due to take place this week, but it has been delayed until next Friday in the face of the latest demand for extra standby funding.

Earlier this week, Thomas Cook said it was “focused on completing” the deal. It is believed to be negotiating with its banks, bondholders and Fosun in an attempt to keep the rescue on track.

In May, the operator reported a £1.5bn loss for the first half of the year. It has also issued three profit warnings over the past year and is struggling to reduce its debts.

It has blamed a series of problems for its profit warnings, including political unrest in holiday destinations such as Turkey, last summer’s prolonged heatwave and customers delaying booking holidays because of Brexit.

If you are on a package holiday you are covered by the Air Travel Organiser’s Licence scheme (Atol).

The scheme will pay for your accommodation abroad, although you may have to move to a different hotel or apartment.

Atol will also pay to have you brought home if the airline is no longer operating.

If you have a holiday booked in the future you will also be refunded by the scheme.

If you have booked a flight-only deal you will need to apply to your travel insurance company or credit card and debit card provider to seek a refund.

When Monarch Airlines collapsed in 2017, the government organised to bring home all the stranded passengers, whether they were covered by Atol or not.

Here is more information on Atol protection and Your questions answered

It has also suffered from competition from online travel agents and low-cost airlines.

The winter months can put a strain on travel companies’ finances as typically there is less revenue coming in, while suppliers need to be paid for services provided over the high summer season.

Mark Burgess, a chief investment officer of Columbia Threadneedle Investments, told the BBC that Thomas Cook’s creditors were “being very careful” about extending lines of credit because the firm was “in a precarious financial position“.

RBS said: “As one of a number of lenders, RBS has provided considerable support to Thomas Cook over many years and continues to work with all parties in order to try and find a resolution to the funding and liquidity shortfall at Thomas Cook.”

Thomas Cook is one of the world’s largest travel companies. It was founded in 1841 to operate temperance day trips. It now has annual sales of £9bn.

If the rescue deal goes ahead, it would be majority-owned by Fosun, which is also a majority shareholder in Wolverhampton Wanderers Football Club and French resort operator Club Med. 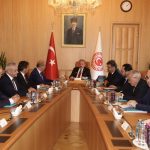 US senator wants to hold off sanctions bill on Turkey