For the first time after a 45-year period, hundreds of Greek Cypriots came on a pilgrimage to the Holy Mother Virgin Mary Church in Akdogan, TRNC.

A group of those attending climbed a wall and entered the Fazıl Küçük Primary School,150 meters away from the Church.

One of that group Greek lowered the Turkish flag in the school garden and took a photo of the TRNC Founding President Rauf Denktaş from an enclosed school notice board.

Police are looking for the man who’s actions were recorded by the security camera.

After looking around the school for a while, he took a photograph of Denktaş from the notice board next to one of the classes.

The same person, passed by the flagpole in the garden several times cutting at the ropes each time then hanging on the pole pulled it down and took the flag.

He then jumped off the walls of the school and disappeared with the Flag and photograph.  The school noticed that the flag was missing the next day.

Police looked at the CCTV footage, and it was determined that the person who lowered the flag was a Greek Cypriot.

The issue is being investigated by the Deputy Prime Minister and the Ministry of Foreign Affairs, the Ministry of National Education and the General Directorate of Police.

The TRNC administration has started inquiries to identify the Greek Cypriots involved in the incident.

Özkaramehmet stated that there was no change in mentality in the Greek Cypriots; They jumped over the wall after they came to the church next to our school. Although our school doors were closed they walked over to the school and still entered.

Ar first the man, who was a Greek man, first turned to the corner where we have a closed notice board for Atatürk.  From there, he tried to take the photograph of Atatürk. But he couldn’t take it because it was securely fixed on the board.

He then turned to the pictures of Turkish Cypriot leaders. From there, he took the photograph of the Founding President Rauf Denktaş and put it in his pocket.

The same person then turned towards the flag of the Republic of Turkey in the playground.

He cut at the rope to which the flag was tied with a cutting tool for 10 minutes. He did this intermittently. He then took the flag with the ropes and ran away. 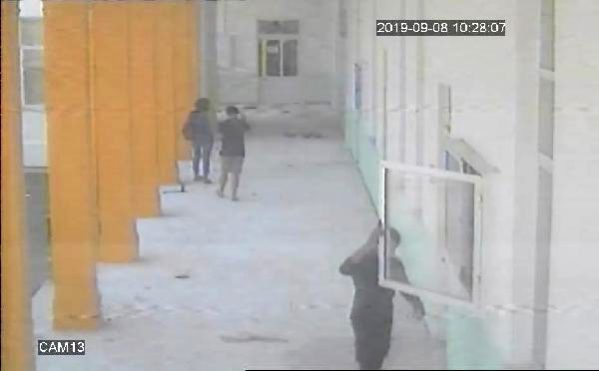 Turks Respect their own flag and hold it higher regard than their own lives and the lives of their family . Turks also respect the flags of other nations, because a human treats others how they would Like to be treaed. This is the act of a dog ,actually that is an insult to dogs, it is an act of a subhuman.

Wait a minute, you already decided who it is. are you sure about it ???