According to the AA news, in his speech at an event, Erdoğan said: “We cannot remain indifferent to the initiatives of gas and sabotage are undertaken in the name of   “drilling’ in the region”.

“Stability in the Eastern Mediterranean and Cyprus is only possible with the observance of Turkey and the TRNC’s rights and interests. We will continue to always protect the legitimate rights of the Turkish Cypriots.” 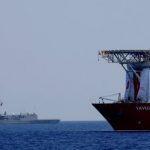