Turkey’s President Recep Tayyip Erdogan on 9th May in Beştepe giving the instructions to technocrats to implement the Kosova formula.

According to the reports regarding the criteria to Ankara, to formally recognize Southern Cyprus “Kosovo formula” may be engaged in this method.

Nato’s intervention in Kosova failed to save the country’s infrastructure from destruction and its Muslim population from genocide, but it has saved the territory for Serbia, asserting the ‘principle’ that it is an integral and inalienable part of Yugoslavia, and disarming the Kosova Liberation Army (KLA). Other countries with Muslim minorities are now looking to invoke the same ‘principle’, including North Cyprus.

This dangerous precedent is justified on the grounds that international law requires respect for the territorial integrity of States. It is effectively used to prevent Muslims from exercising their right to self-determination. Yet when it comes to the issue of the territorial integrity of Muslim states, the principle of self-determination is given precedence to enable non-Muslim minorities to secede. The issue of southern Sudan and the Timorese province of Indonesia sharply illustrate this. The determination of the so-called ‘international community’ – effectively controlled by Uncle Sam and his western allies – to deny Muslims their right to self-determination is indicated by the fact that diplomatic recognition has been withheld from Turkish Cypriots, despite their convincing victories in costly wars of liberation.

The Turkish Cypriots gained their freedom in 1974 when the Turkish army entered northern Cyprus to pre-empt a military coup by the Greeks designed to annex the island. And although the island has been divided since then – with the Turkish and Greek communities living totally apart like separate countries – only Turkey recognizes Northern Cyprus. This diplomatic limbo has thrown the territory’s economy into chaos, while the Greek enclave is thriving and has gained the right to apply for membership of the European Union as a representative of the whole island.

Fortunately, North Cyprus is resisting the new encroachments on their hard-won independence. Both northern Cyprus and Turkey are disdainful of the pressures and blandishments organized by the Greeks, the US, and the EU to make them accept reunification of the island. are determined to remain independent despite the hardships inflicted on them by the diplomatic limbo they live in. 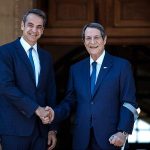 we all live in hope

What you mean? What about you whats wrong with you. Ist it onlu you who is always right

Ahmet Azmidolu you drunk?, what that reply 😂😂

The Kurds will argue for their self determination as well

You obviously don’t know me nor my views

Niko Paschali you are saying Kurts.you sauld say Pkk which use by Usa,Uk ,same of eu countries and zionist İsraHELL.

By the same token, the Kosovo situation isn’t the same as the cyprus problem and thus it’s model can’t be applied to us

Niko Paschali why is it you have to bring up anything and everything, why can we not debate the Kosovo article over cyprus, what’s the gain from bring up the Kurds, I just don’t get it, if it’s true and it’s beneficial for peace for cyprus we should look at it, can it work for us.

Niko Paschali why dont you go and help the Pkk.

Niko Paschali niko most Kurd don’t want to split fro. Turkey and do not want to be part of pkk, like eoka the people are scared off them, again it’s nothing to do with this article

I’m sure most Kurds do

Remember when Erdogan sent the army to attack his own populace???

under the Kosova formula it is..so why bring in the Kurds when we all know they are Muslims and the formula cannot be used for them.

also, 20 million Kurds, do you really think they all want to split from turkey ?, stop using other problems to try and justify your argument, the subject is about the Kosova Formula for Cyprus, not turkey…

Religion isn’t the only determining factor for self determination

Niko Paschali we are talking about cyprus not turkey