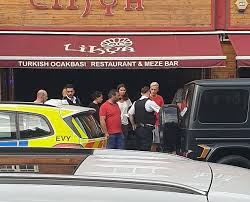 MESUT OZIL ran for his life as he and Arsenal teammate Sead Kolasinac were attacked by knife-wielding moped thugs yesterday.

Dramatic footage shows 26-year-old Kolasinac – nicknamed The Tank – leaping from the £100,000 motor and fighting off the armed attackers with his bare hands.

They were caught on CCTV brandishing weapons as they tried to steal a watch and gain access to Ozil’s car while the childhood pals were parked outside Kolasinac’s house.

But after Kolasinac leapt back in the car off-camera, the moped muggers then began a high-speed mile-long chase down busy Golders Green Road at around 5 pm.

After the dramatic pursuit, Ozil’s car came to a halt – at which point the helmet-wearing raiders launched stones and a brick at the 4×4’s windows.

A “terrified” Ozil and his wife Amine abandoned the gold-trimmed SUV and fled on foot.

They took refuge in their favourite Turkish restaurant – which they called during their ordeal on Thursday afternoon.

Staff immediately rushed to the £350,000-a-week star’s aid, piling out onto the street to help chase away the would-be carjackers.

Police rushed to the scene and cops were later spotted questioning the Gunners forward.

A spokesman for the Metropolitan Police said: “It was reported that suspects on motorbikes had attempted to rob a man who was driving a car.

“The driver, along with his passenger, managed to get away unharmed and travelled to a restaurant in Golders Green, where they were spoken to by officers.”

THE 6ft Bosnian – known as The Tank – was born in Germany to refugee parents who fled their Balkan homeland.

They settled in Karlsruhe where dad Faik worked at a local Mercedes-Benz factory while Kolasinac began attracting the attention of German clubs.

Although he gained fame, the humble footballer always made sure he visited home each week for a traditonal dinner cooked by his mum.

The family still make an annual visit to their native Domanovici but Kolasinac has praised German for how the country helped his family.

He said in 2017: “I have Germany to thank for everything, just like my family.

Family-driven Kolasinac married his long-term girlfriend Bella last month in Baden after meeting her at Schalke 04.

The German side is where The Tank first met his best mate Ozil, who at five years his senior looked after him.

Both players bonded over their shared Muslim faith and have since attended each other’s weddings.

There have been no arrests and detectives are investigating the brazen attack, Scotland Yard said.

Ozil and Kolasinac have been friends since they were teenagers when they played together at German side Schalke 04 and they have grown closer since since the Bosnian under his wing at Arsenal in 2017.

They were pictured together at Kolasinac’s marriage to Bella, alongside Ozil’s wife Amine Gulse in Baden, Germany.

Financial worker Azuka Alintah, 36, was out food shopping when she witnessed the end of the horrifying chase.

“His car was standing there empty in the middle of the road with its door hanging open. It is very distinctive, with gold trim.

“Ozil looked absolutely terrified, as anybody would after being chased by men with knives.

“He looked like he was running for his life. And I suppose he was.

“I saw him disappear into the restaurant with the motorcycle guys on his tail.

“They didn’t take off their helmets and were all in black, wearing long-sleeved tops in this hot weather. They stood out. It was really creepy.

How moped muggers have targeted rich and famous

THE violent attack on Ozil and Kolasinac is the latest in a string of moped muggings on celebs in the UK.

Just last month, Strictly star Pasha Kovalev was robbed of his mobile by moped thieves while standing outside a theatre.

In the same month, Keith Lemon was attacked by moped muggers in the street who tried nabbing his watch.

Sajid Javid revealed in 2018 that robbers stole his mobile phone as he stood outside Euston station.

Fellow politician George Osborne was also targeted by a gang that robbed 103 phones in an 18-day reign of terror.

In 2016, footballer Andy Carroll was chased by a gun-wielding mugger as he drove his Jeep to the West Ham training ground.

But it isn’t just celebs being targeted – with shocking figures revealing the growth of moped crime has exploded by 1,000 per cent across the UK in the past three years.

And Lawless London has seen the highest spike in moped muggings, where over 19,000 separate offences were recorded last year alone.

One brazen moped mugger laughed as he told The Sun Online last year he could make £1,500-a-DAY stealing from innocent victims in London and bragged that cops are powerless.

The former gangster he has “no remorse” for the crimes he carried out and said he would target the rich because they’re insured, adding: “They’re not gonna miss nothing. Love that.”

Cops had been criticised due to a widespread belief that they weren’t allowed to pursue a suspect on a moped if they weren’t wearing a helmet.

But proposed changes in the law make it explicit that specially trained police drivers can chase a rider without a helmet.

Specialist cops known as the Scorpion Squad now use ‘tactical’ ramming to crackdown on the brutal crime.

“God knows what would have happened if they’d caught him.

“It looked to me like he’d have been hacked to shreds and he clearly thought so too.”

The eyewitness added: “As soon as the restaurant staff started to come to the window and to the doorway, they turned around and roared off.

“The police were there shortly afterwards and the road was almost blocked off.

“It was totally surreal, just surreal and strange. You don’t expect something like that to happen at any time, particularly the mid-afternoon.”

She said a panicked Ozil called her business partner during the “10 or 15 minute” chase and told him to call the police.

A spokesperson for Arsenal also confirmed the duo were involved in an attempted carjacking.

They added: “We have been in contact with both players and they are fine.”

Both players have just returned to England following Arsenal’s pre-season tour of America.

Arsenal went on to lose the International Champions Cup clash 3-2 on penalties.

Full-back Kolasinac and Ozil are not the first London footballers to be targeted on the road.

In 2016, then West Ham striker Andy Carroll was threatened at gunpoint on his way home from training. 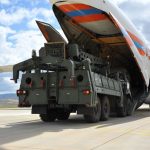