The former London mayor is the great-grandson of the Ottoman Empire’s last interior minister, Ali Kemal, and his ancestry has been a source of pride for many Turks.

Despite his sometimes disparaging remarks about Turkey, including a crude limerick about President Tayyip Erdogan and demands in 2016 that Britain veto Turkey’s accession to the European Union, Johnson is affectionately referred to as “Boris the Turk” by some Turkish media.

“Ottoman grandson becomes prime minister,” read a front-page headline of the opposition newspaper Sozcu. “For England, a prime minister with roots in Cankiri,” it said, referring to Kemal’s home province in central Turkey.

Like Johnson, his great-grandfather was a journalist who went into government, a move that proved ill-fated. In the final days of the Ottoman Empire, Kemal was captured and lynched by nationalists fighting to establish the Turkish state.

Erdogan congratulated Johnson on Twitter, adding that ties between Turkey and the United Kingdom were set to improve. Foreign Minister Mevlut Cavusoglu also congratulated him, sharing a video of Turkish reporters asking Johnson about his roots in Cankiri during a 2016 visit to Ankara.

Demiroren News Agency quoted a resident of Cankiri’s Kalfat village as saying it was an honor that someone from their village had become prime minister, adding that Johnson owed his distinctive mop of blond hair to his Turkish forefathers.

“They call his ancestors from this house ‘Blond Boys’. Boris Johnson’s blondness comes from this lineage,” Mustafa Bal said.

Johnson’s own relations with Turkey have sometimes been rocky.

Three years ago he won first prize in a British magazine competition which asked readers to compose limericks about Erdogan “as filthy and insulting as possible”. He later said the Turkish leader had not brought up the verse when they met.

Johnson, a leading campaigner for Brexit in Britain’s 2016 EU referendum, wrote to then-Prime Minister David Cameron before the vote calling for the government to veto Turkish EU accession and stop a planned extension of visa-free travel to Turkey.

Turkey’s EU accession talks are now stalled, while Johnson has barely three months to meet an Oct. 31 deadline to negotiate Britain’s exit from the bloc.

Pro-government newspaper Aksam said Johnson, who succeeds Theresa May as prime minister after winning the leadership of the ruling Conservative Party, may have been helped by a bit of Turkish folklore.

Receiving a Turkish award in 2012 for his work as London mayor, Johnson was told of a belief in the Black Sea province of Rize, where then-premier Erdogan’s family hail from, that no one could become prime minister unless they could play the kemence, a traditional stringed instrument.

Johnson had a go, video footage shows, and despite his limited skills the instrument appears to have worked its charm. “The kemence brought good luck,” Aksam newspaper said. 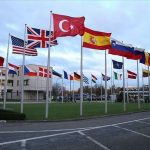