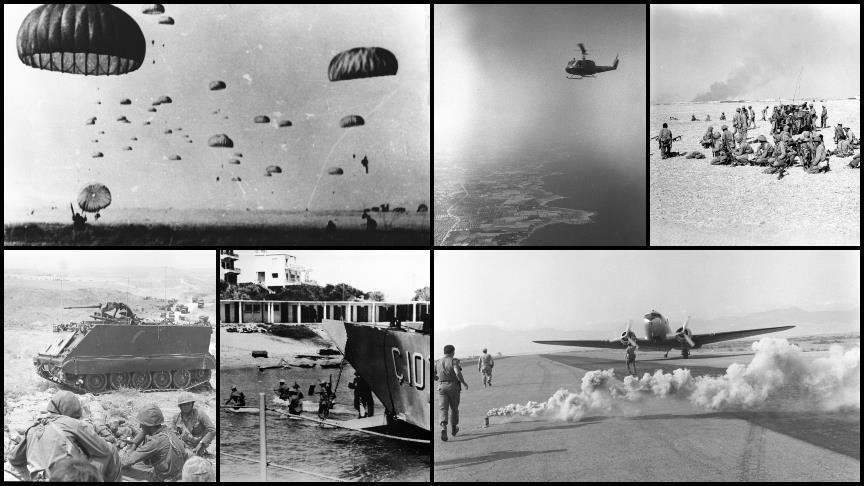 “The Turkish Armed Forces [TSK] will not open fire as long as it is not fired upon, they are in Cyprus not for war but for peace. [The TSK] is in Cyprus not for an occupation but to stop an occupation. With its operation launched at dawn, [the TSK] will save both Turkish and Greek Cypriots from the darkness of the oppressive regime.”

These were the words of Turkey’s former Prime Minister Bulent Ecevit, shortly after Ankara launched a major Peace Operation on the island of Cyprus in July 1974. 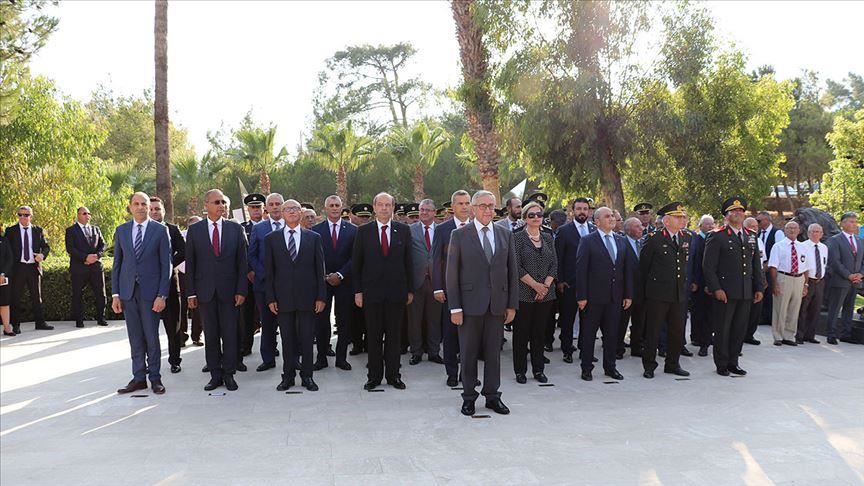 The chain of events that set the stage for Turkey’s Cyprus Peace Operation in 1974 has its roots in the mid-1950s when EOKA, a terror group seeking Enosis — the annexation of islands in favor of Greece — started oppressing and killing local Turkish Cypriots.

EOKA terrorists sought the removal of Turkish Cypriots to remote parts of the island in what can only be described as ethnic cleansing. The terror group’s brutal violence forced Turkish Cypriots of least 33 mixed villages to abandon their homes from 1955 to 1958.

According to official data in Turkey’s Foreign Ministry archives, Ankara and Athens came to terms on February 11, 1959, with the approval of the U.K. as well as leaders of the island’s conflicting communities.

The Zurich and London agreements paved the way for independence, inter-communal harmony and societal autonomy with Turkey, Greece and the U.K. their guarantors. The pacts precipitated the establishment of Republic of Cyprus in 1960, which would provide equal rights to all residents of the island.

Though providing Turkish Cypriots a glimmer of hope, it later became apparent that these promises were a mirage.

On December 21, 1963, systematic and comprehensive attacks towards Turkish Cypriots began while their representatives in state institutions were discriminated against and alienated by their Greek Cypriot counterparts.

This aggressive campaign led to the “Bloody Chrismas” of 1963, in which 103 villages inhabited by Turkish Cypriots were targeted resulting in the deaths of hundreds. About 30,000 Turkish Cypriots were forced to leave their homes and take shelter in an area constituting only 3% of the island.

The tipping point came on July 15, 1974, when then-President of Cyprus Makarios was ousted by the ultra-nationalist and anti-Turkish Nikos Sampson, one of the leaders of EOKA-B — a Greek Cypriot paramilitary organization formed in 1971.

Having learned about the coup, which was supported by the military junta running Greece at the time, Ankara was quick to respond. Turkey’s National Security Council was established and then-Prime Minister Bulent Ecevit instructed the Turkish army to prepare for a possible operation in Cyprus.

On July 20, 1974, Ecevit announced the start of the operation, which he said would “have a great contribution to mankind and peace.”

The Turkish operation prevented the “annexation” of Cyprus and provided protection to Turkish Cypriots who had suffered for years at the hands of the radical Greek Cypriots.

Turkish paratroopers were deployed at various points of the Island, while fighter jets flew low over the land. Following the UN Security Council’s (UNSC) call, Turkey stopped its operation and agreed on a ceasefire with Greece.

Nikos Sampson stepped down as president at the end of the fighting, with a total of 57 Turkish soldiers being martyred and another 184 wounded at the end of the three-day campaign. The junta government of Greece collapsed following the peace operation.

Peace talks were launched on July 25 in Geneva, though discussions were stalled as the Greek side did not comply with the ceasefire agreement and rejected Turkey’s federation offer based on equal rights for Turkish and Greek Cypriots.

On Aug. 14, Turkey started the second phase of the peace operation, launched under the code-phrase “Ayse Tatile Ciksin” (Ayse should go on vacation) in order to mislead foreign intelligence operatives possibly tapping into the phones of Turkish officials.

Notably, during the operation, a number of mass graves of Turkish civilians were unveiled in Turkish towns.

Huseyin Isiksal, an international relations specialist at the Near East University in Lefkosa, told Anadolu Agency that Turkey originally intended to run the operation about a decade earlier, but that this was delayed by the contemporary political climate.

“Terrible things happened from 1964 to 1974 and Turkish Cypriots literally suffered during this period,” Isiksal said, adding that one-fourth of the Turkish-origin population was subjected to forced migration.

“These Turkish Cypriots [working in state institutions] were kicked out of legislative, executive and jurisdiction bodies; they were not a minority but had a partner status [in the 1960s],” he underlined.

“The Greek Cypriots ignored laws requiring a system based on two different peoples. In fact, as a result of the atrocities, Turkish Cypriots were forced to live in enclaves. It was difficult and extremely dangerous to leave the enclaves,” Isiksal said.

Adding that the people residing in these areas were subjected to inhumane practices, he underlined that they were denied even basic goods such as clothes, gloves, socks, bags and batteries banned for being “strategic items”.

Isiksal underlined that many Turkish Cypriots working for the Cypriot government were unable to receive their salaries, with tens of thousands migrating to other countries to flee the conflict-prone atmosphere, particularly to Turkey, the U.K. and Australia.

Isiksal underlined that as one of the “guarantor” countries of the agreements hammered between Ankara, London and Athens, Turkey bore the right to launch an operation to protect “basic rights” of Turkish Cypriots.

According to Isiksal, Greece followed a propaganda campaign that depicted Turkey and Turkish Cypriots as parties with no will to reach consensus and convinced certain countries in this endeavor.

The Greek rejection of the Annan Plan — named after former UN Secretary-General Kofi Annan — which envisaged the reunification of the people in the island through a federation in 2004, was yet another milestone in the dispute.

The resolution plan was rejected by the Greek Cypriot administration in dual referendums held in on both sides of the island. While Turkish Cypriots raised support to the plan, the Greek residents of Cyprus rejected it.

“The Annan plan was the last opportunity for the reunification of the island; however it was rejected by the Greek Cypriots,” Isiksal said, adding that this was proof that it was the Greek side that was not sincere in the pursuit of peace.

He stressed that it took more than 5 years of shuttle diplomacy and six different drafts to prepare the Annan Plan, which was welcomed by the TRNC, whereas the Greek Cypriots did not support it wholeheartedly.

Drilling activities in the Mediterranean

Today, the Greek Cypriot administration unilaterally drills in the Eastern Mediterranean, ignoring the drilling rights of TRNC and of Turkey — who was given the right to conduct drilling activities around the island by the TRNC.

Since this spring, Ankara has sent two drilling vessels — Fatih and most recently Yavuz — to the Eastern Mediterranean, asserting the rights of Turkey and the TRNC over the resources of the region.

The Turkish-flagged drillship, Fatih, launched offshore drilling operations this May in an area 75 kilometers (42 nautical miles) off the western coast of the island of Cyprus.

“The European Union’s operational mechanism is problematic in nature as it loses its objectivity when the issue is about a family member,” Isiksal said, slamming the bloc’s double-standards.

Isiksal criticized EU foreign policy chief Federica Mogherini for passing judgment on the dispute and taking a stance against Turkey’s drilling activities in the basin.

“I’d like to point out that Turkey’s arguments [in Eastern Mediterranean] are strong. The reason why the EU is so harsh and partisan is simply that it is not impartial,” he asserted.

He argued that the main conflict in the sea was identical to that on the land: the Greek side’s rejection of the Turkish Cypriots and its view of itself as the sole resident of the island.

The decades since have seen several attempts to resolve the dispute, all ending in failure. The latest one, held with the participation of the guarantor countries — Turkey, Greece, and the U.K. — ended in 2017 in Switzerland.

In 2004, in twin referendums, the plan of then UN Secretary-General Kofi Annan was accepted by Turkish Cypriots but rejected by Greek Cypriots.

Talks have focused on a federal model, based on the political equality of the Turkish and Greek Cypriot sides, but Greek Cypriots’ rejection of such a solution, including the Annan plan, led to the emergence of other models.

In a recent report, current UN Secretary-General Antonio Guterres also said that “new ideas” may be needed for a settlement on the island. 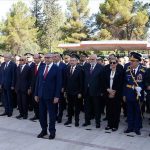 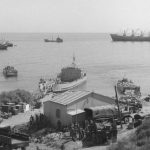 Another Angel Seeks Our Help