A Turkish diplomat has been killed in an armed attack at a restaurant in Erbil, Iraq on Wednesday.

According to the restaurant owner, the attacker — in plainclothes and carrying two guns — targeted the Turkish diplomats dining in a restaurant in Erbil.

One Turkish diplomat, who was working at Turkey’s Consulate General in Erbil, was martyred after the assailant stormed the restaurant for a shooting. Erbil’s police chief Abdulhalik Talat said an investigation was immediately launched into the incident and further information will be shared later.

All the roads leading to other cities were blocked to prevent the attacker from escaping.

Security forces took measures in front of the restaurant after the attack. Turkey’s Foreign Ministry, in an immediate written statement, confirmed that a Turkish diplomat was martyred in the attack.

“This afternoon (17 July 2019), an official of our Consulate General in Erbil has been martyred as a result of a heinous attack, while he was outside of our Consulate compound,” read the statement.

“We wish Allah’s mercy upon our martyr, extend our condolences to his family and the Turkish Nation,” it said.

“We have requested the Iraqi and regional authorities to find the perpetrators of the attack swiftly,” the ministry added.

For its part, Iraq’s foreign ministry on Wednesday denounced the armed attack.

“We strongly condemn the incident (…) We continue coordinating with the official authorities to learn about the incident’s details, “ Ahmed al-Sahaf, the ministry’s spokesman, said in a brief statement. 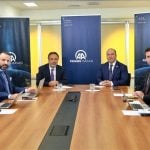 Turkish lira rises to four-month high ahead of religious holiday