Özersay: “We are the joint owner of hydrocarbon resources in the Eastern Mediterranean”

Emphasizing that some facts are still not acknowledged regarding the hydrocarbon resources in the Eastern Mediterranean, Deputy Prime Minister and Minister of Foreign Affairs Kudret Özersay stated that first of all, these resources belong to both communities. In other words, Turkish Cypriots and Greek Cypriots are joint owners of these resources.”

Özersay is holding contacts in Switzerland and delivered a speech at the press conference entitled “The Recent Developments in Cyprus and the Eastern Mediterranean” organized by the Association of Accredited Correspondents at the United Nations (ACANU) in Geneva.

Özersay emphasized that some facts are still not questioned regarding hydrocarbon resources in the Eastern Mediterranean and added:

“First of all, these resources belong to both communities. In other words, Turkish Cypriots and Greek Cypriots are joint owners of these resources, but this is not questioned. This fact was even approved by the Greek side at the UN General Assembly in New York. It was also accepted by the EU and the UN. This is clearly stated in many reports of the UN Secretary-General. We are joint owners of these hydrocarbon resources. This very important element cannot be ignored.”

Özersay said: “Our stance on this issue is clear. This stance means that some conflicts are eliminated and have made the stability permanent in the Eastern Mediterranean. All we need is solidarity. This solidarity will also be the beginning of a lasting solution in Cyprus. ”

Stating that we need direct dialogue on this issue, Özersay advised in order to reach a solution on hydrocarbon resources companies should be authorised to have licenses from both sides.

Upon a question whether he was optimistic about the resumption of the Cyprus talks, Özersay continued:

If we’re going to start the talks again, it’s better not to negotiate in terms of the restoration of the talks. The reason for this is that no one will question the abnormality of the status quo when we have Cyprus negotiations with no consequences and the same practices continue. The extraordinary situation in the region needs to be questioned. We need to question the base which is the cause of the problem. ”

Özersay underlined that before starting a new negotiation process, the parties should agree and assimilate what kind of partnership they want.

Özersay explained that the Turkish Cypriot side has taken all kinds of concrete steps for a solution and emphasized that the only solution is not a “Federal Cyprus, and that other solutions can be found. 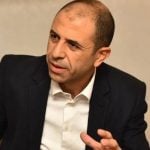 Özersay: “Greek Foreign Ministry is trying to obstruct our contacts” 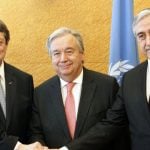 The letter to Guterres