Prime Minister Ersin Tatar stated that it is a must to protect our homeland, both Turkey and the Turkish Republic of Northern Cyprus are decisive on that issue.

In his written statement, Prime Minister Ersin Tatar has evaluated the reports that the Greek Prime Minister Alexis Tsipras and French President Emmanuel Macron were preparing to ask the European Union to impose sanctions on Turkey over its drilling activities in the Eastern Mediterranean.

The Prime Minister said that neither Turkey nor the TRNC will be intimidated by threats and reminded that the EU had failed to keep its promises to the Turkish Cypriot people. “There is a conflict of interests in the Eastern Mediterranean.

Several countries in cooperation with South Cyprus are trying to exclude Turkey from the region. They dream of usurping our rights,” he said, adding that the international community was wrongfully encouraging the Greek Cypriots.

Tatar also emphasized that there is a conflict of interests in the Eastern Mediterranean and the Middle East, of which there is no past example, adding that some so-called civilized nations and international organizations, such as EU and UN, are cooperating with the Greek Cypriot Administration and trying to violate the rights of the TRNC and Turkey.

Finally Tatar said that Turkey and the TRNC will continue to protect its rights and interests in the region. 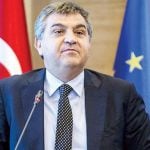