The Council of Ministers has taken steps to open the closed city of Maraş. The Council decided to make a scientific inventory study by establishing a team of experts.

Deputy Prime Minister and Minister of Foreign Affairs Kudret Özersay announced the decision of the Council of Ministers.

Stating that it is time to take a concrete step regarding the closed city of Maraş, Özersay said “The team which will be formed by taking advantage of the names operating in the international field will conduct a comprehensive inventory study that will include issues such as title deed records in the closed city Maraş, the status of movable and immovable properties, the determination of the properties of the foundation, the status of the infrastructure, and the elements carrying risks for the environment. They will be also tasked with reporting to the Deputy Prime Ministry and the Ministry of Foreign Affairs”.

The steps to be taken will be evaluated more accurately based on the data that will emerge after the reports are made as a result of the inventory study. The Council of Ministers will make a special decision and prepare the conditions for the work to be carried out by the team in the closed Maraş, which is legally a military zone area within the TRNC territory.

Özersay also stated that the issue regarding the Maronites initiative was also discussed at the Council of Ministers yesterday (18th June). Özersay also said that the tender process has been completed on the issue of Karpaşa and the contract is most likely to be concluded on Friday of this week (21st June).

Özersay added that it would be possible to move some people especially living in Karpaşa to the houses to be built with the signing of the contract and thus, it would be possible to return immovable properties to around 10-15 Maronites where they had already been approved as the owner within the framework of the TRNC constitutional law. 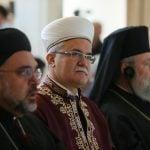