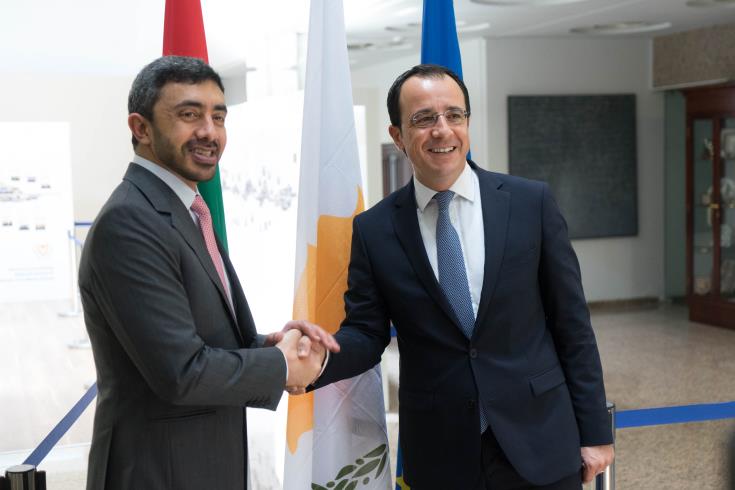 Nikos Christodoulides has said that Turkey’s recent escalating actions in Cyprus’ exclusive economic zone and the increased militarization of the area by Turkey, violate international law and Cyprus’ sovereign rights. At the same time, he pointed out, they also constitute an integral part of Turkey’s concerted strategy to exert control in the Eastern Mediterranean, including the energy developments, at the expense of the sovereign rights of other countries in the region, thus putting in high risk the peace, security and stability of our volatile region.

The Minister discussed Turkey’s actions with his counterpart of the United Arab Emirates, Sheikh Abdullah bin Zayed Al Nahyan who is paying Cyprus a visit. He expressed his gratitude for the support regarding the recent attacks in the sea of Oman and in the UAE.

Christodoulides briefed Al Nahyan on the latest developments as regards our continued and committed efforts to resume negotiations for a comprehensive settlement of the Cyprus Problem. “We very much appreciate the UAE’s clear support to these efforts. We expect Turkey to cease its gunboat diplomacy so as to pave the way for the resumption of the negotiations under UN auspices for the reunification of Cyprus”, he said in his statements following talks at the Foreign Ministry on Saturday.

The latest round of UN-backed negotiations to reunite the island under a federal roof took place in the summer of 2017 at the Swiss resort of Crans Montana but failed to yield any results.

UAE’s Foreign Minister described Cyprus as a wonderful friend and supporter and expressed his gratitude for the support regarding the recent attacks in the sea of Oman and in the UAE.

The two Ministers signed a Memorandum of Understanding on Establishing a Joint Committee of Cooperation, as well as an Agreement on Economic and Technical Cooperation.

As Christodoulides said, these are two very important agreements setting the legal framework for the way forward in further expanding bilateral relations, in the political as well as in the economic sectors and an important step in the direction of further enhancing the EU-UAE relations.

The Cyprus FM referred also to the recent attacks that took place in the Gulf region and he underlined that Cyprus “stands shoulder-to-shoulder with the UAE and our partners in the region in condemning any acts of terror and in conveying a clear message of our undiminished resolve to work together to counter this phenomenon”.

On regional issues, he said that he briefed Sheikh Abdullah on Anastasiades’ important regional initiative on climate change involving countries of the Eastern Mediterranean, Middle East and Gulf region, which share the same climatic characteristics.

With regards to Syria, the Minister expressed Cyprus’ continued support for the U.N- led Geneva peace process, as well as its serious concern with the continuing refugee and humanitarian crisis.

On Yemen, he expressed Nicosia’s support to UN Special Envoy Griffiths and reiterated the importance for the agreements reached to be implemented, while at the same time “we shared our concerns regarding the dire humanitarian situation”.

“We discussed the situation with regards to the Middle East Peace Process ahead of the Manama meeting later this month and the anticipated US plan. A solution to the Israeli – Palestinian conflict, based on the internationally accepted parameters, namely the two-state solution, is indispensable to the stability and security of the region”, he added.

He also briefed Sheikh Abdullah on the latest developments in the trilateral cooperation mechanisms Cyprus and Greece have established with countries in the region, including Egypt, Lebanon, Jordan, Israel and Palestine with a shared vision for a future of peace, stability and prosperity in our region.

Cyprus is a wonderful friend and a supporter and although this relationship is only twelve years old, we managed to bring this relationship up to the level of trust, Sheikh Abdullah said in his statements. He referred to the tourists who visit Cyprus from the UAE as well as those who made Cyprus their second home and for whom he is very proud, he said.

“Trade is not as strong as we would like it to be, 120 million euros is not bad but is not good enough”, he said referring to the trade relations.

As regards as the challenges in the region to which the Cyprus FM spoke of, the Sheikh said that his country is very grateful for Cyprus’ understanding of the developments in the region, specifically in the Arabian Gulf, the Sea of Oman and in Yemen.
“These are developments which we hope that we can de-escalate the situation, that would need a lot of wise hands across the region and the world, that would need friends and partners like you, who can understand, we need a plan for the region that through support covers all of the regions, and to take into account the concerns of the region”, he said.

He added that on these matters they spoke in length and thanked his counterpart for his strong support on UAE’s positions “on the attacks in our seas”.

Sheikh Abdullah said that for these attacks his country has presented evidence to the UNSC in a very technical manner and a manner which is responsible, open and transparent and “we invited many of our allies and partners to look at it”. He spoke of state-sponsored attacks, adding that they have named the state and hoping that they can further work with our friends and partners in preventing such escalations from moving forward.

As he said Cyprus and the UAW are countries of the same region, which face the same challenges. We can only overcome these challenges if we work together with one another and with other partners in the region he said. As regards the Mideast peace process he said that the problems with the Palestinians and the Israelis constitute a serious concern adding that both Cyprus and UAE  agree that the issue needs to move forward for the people of the region and the region itself. 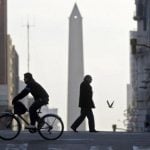 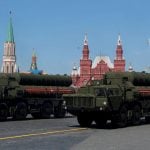