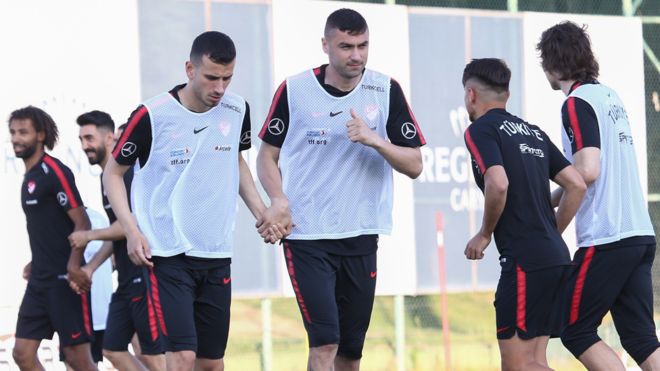 Turkey has expressed fury at the way its national footballers were treated at Iceland’s Reykjavik airport.

In a tweet, Foreign Minister Mevlut Cavusoglu called the team’s treatment “unacceptable in terms of diplomatic and humanitarian practice” and said Turkey would “do what is necessary”.

As journalists surrounded some players on arrival a dish-scouring brush could be seen among the microphones.

According to Turkish broadcaster NTV, Turkey has delivered a diplomatic protest to Iceland. Icelandic officials have not yet responded to a request for comment on the incident.

The Turkish team arrived on Sunday, ahead of a match against Iceland on Tuesday in the Uefa Euro 2020 qualifying competition.

Turkey currently tops Group H, having won all three of its matches so far in the six-nation group. The team beat world champions France 2-0 on Saturday.

To make matters worse a reporter decided to hold a toilet brush to the face of Emre Belözoğlu pic.twitter.com/Ahh1NxSa1t

Burak Yilmaz, a striker for the Turkish club Besiktas, was quoted as saying the team were kept waiting at Icelandic customs for three hours, during a painstaking bag search.

Turkey’s President Recep Tayyip Erdogan is a football fan, having played semi-professionally before he was elected as mayor of Istanbul in 1994.

His spokesperson Ibrahim Kalin tweeted to say that “disrespect to our national team in Iceland is unacceptable”.

“Our state and nation stand next to the national team, who will give the best answer on the field,” he said.

President Erdogan was best man at the wedding of the German footballer Mesut Ozil, who is ethnically Turkish, on Friday.

There was also diplomatic tension surrounding the Turkey-France match on Saturday in Konya.

French President Emmanuel Macron said sustained whistling by Turkish fans while the French national anthem was being played was “unacceptable”.

On Monday Noël Le Graët, head of the French Football Federation, said the whistling was “regrettable” but added: “for me, it does not amount to an incident”. His response suggests that France will not escalate the matter with Turkey.

President Macron is among the most vocal opponents in the EU to Turkey’s bid to join the 28-nation bloc. Turkey’s talks on EU membership are currently deadlocked. 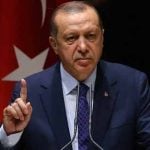 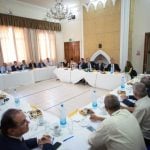