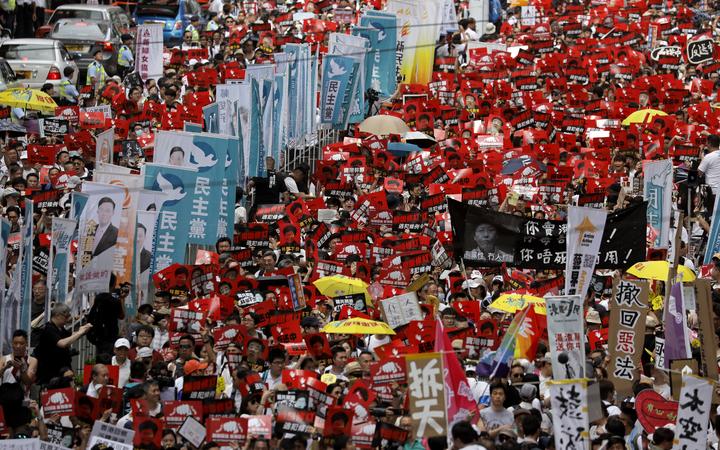 Hundreds of thousands of people are marching in Hong Kong against a law critics fear could let China target political opponents in the territory.

The controversial extradition bill would allow suspected criminals to be sent to mainland China for trial.

The protests are thought to be the biggest since the 2014 Umbrella Movement, which saw hundreds of thousands take to the streets.

The government says the bill has built-in protections and will plug loopholes.

Hong Kong’s leader Carrie Lam has pushed for the amendments to be passed before July. Supporters say safeguards are in place to prevent anyone facing religious or political persecution from being extradited to mainland China.

But the bill’s critics say those in the former British colony would be exposed to China’s deeply flawed justice system, and it would lead to further erosion of the city’s judicial independence.

Protesters, marching in the sweltering heat dressed in white, include a wide range of people – from businesspeople and lawyers to students, pro-democracy figures and religious groups.

“This is the end game for Hong Kong, it is a matter of life or death. That’s why I come,” Rocky Chang, a 59-year-old professor, told Reuters news agency. “This is an evil law.”

“This bill will not just affect Hong Kong’s reputation as an international finance centre, but also our judicial system. That has an impact on my future.”

It looks like a regular protest in Hong Kong: a peaceful and orderly march.

People help each other out. They fan for each other, help push the wheelchairs. Water refill stations have been set up by volunteers, too.

This march is expected to be the biggest in Hong Kong since the Umbrella Movement in 2014. The city’s pro-democracy movement has been hard hit since then because protesters failed to gain any concessions from the government after they occupied the heart of the city for 79 days.

Many protesters are not optimistic that the government will back down now. After all, the pro-Beijing parties enjoy a majority in the legislature.

The people have spoken, but whether the government listens is another matter.

What are the proposed changes?

The changes will allow for extradition requests from authorities in mainland China, Taiwan and Macau for suspects accused of criminal wrongdoing such as murder and rape.

The requests will then be decided on a case-by-case basis.

Hong Kong officials have said Hong Kong courts will have the final say over whether to grant such extradition requests, and suspects accused of political and religious crimes will not be extradited.

The government has sought to reassure the public with some concessions, including promising to only hand over fugitives for offences carrying maximum sentences of at least seven years.

There has been a lot of public opposition, and critics say people would be subject to arbitrary detention, unfair trial and torture under China’s judicial system.

Why the change now?

The latest proposal has come after a 19-year-old Hong Kong man allegedly murdered his 20-year-old pregnant girlfriend while they were holidaying in Taiwan together in February last year. The man fled Taiwan and returned to Hong Kong last year.

Taiwanese officials have sought help from Hong Kong authorities to extradite the man, but Hong Kong officials say they cannot comply because of the lack of an extradition agreement with Taiwan.

But the Taiwanese government has said it will not seek to extradite the murder suspect under the proposed changes, and has urged Hong Kong to handle the case separately.

A former British colony, Hong Kong is semi-autonomous under the principle of “one country, two systems” after it returned to Chinese rule in 1997.

The city has its own laws and its residents enjoy civil liberties unavailable to their mainland counterparts.

Hong Kong has entered into extradition agreements with 20 countries, including the UK and the US, but no such agreements have been reached with mainland China despite ongoing negotiations in the past two decades.

Critics have attributed such failures to poor legal protection for defendants under Chinese law. 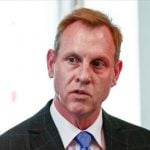