The finance minister of the Turkish Republic of Northern Cyprus (TRNC), Serdar Denktaş, on Wednesday announced his resignation.

Denktaş, who also leads the Democratic Party (DP), explained in a written statement that he was solely resigning from the ministry post and would continue to support the current government in Parliament.

Denktaş said he had informed Prime Minister Tufan Erhürman of his decision to resign via a written statement earlier in the day. He added that he would provide necessary details about his resignation in the future.

The 60-year-old politician is the son of Rauf Denktaş, the founding father of TRNC who died in 2012.

Serdar Denktaş had been accused of renting without tender state fields to Rauf Denktaş University, of which his son is a partner, and had come under fire from coalition partner People’s Party (HP) and opposition parties.

Denktaş had served as the finance minister since April 2016. Before that post, Denktaş had held numerous other minister titles in the past 25 years, including several terms as deputy prime minister, a stint as acting prime minister and a term as foreign minister. 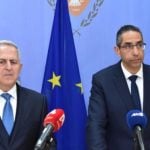